The sun came up over the foothills in the east with a fierce red hue that reminds everyone that half the state is burning.  Man it has been a hot dry summer!  I was headed north to meet up with Shane for a day-long float.  I was late as usual, but Shane was a good sport... as usual.  Despite the hot, bluebird skies predicted for the day our plan was to throw tandem streamer rigs for some big shouldered trout.  I was filled with that excitement that all passionate fisherman feel preceding a full days fishing.  With the possibility of large aggressive fish it's hard not to feel a bit giddy (in a manly grunting sort of way).  Little did I know that the day would punch me in the face with a boga grip, swing me around in the air, and finish with a release that a Greek discus thrower would be proud of.

We shuttled the vehicles, rigged up, and were on the water without a hitch.  There were a couple grabs in the first few minutes of floating even, but nothing stuck.  After a short while Shane picked up a decent 18-19incher. 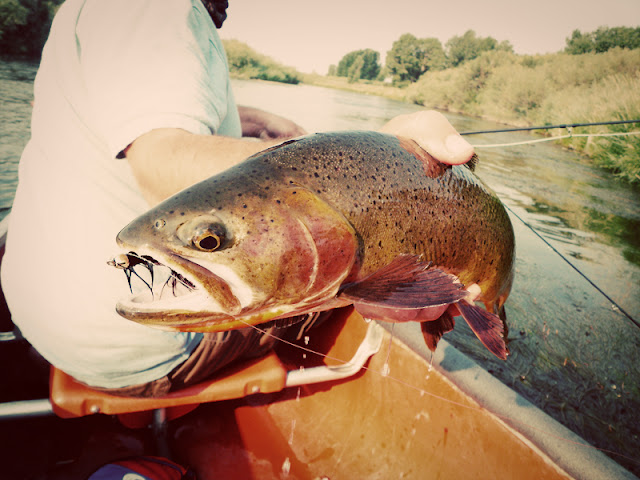 I followed with a handful of little guys.  It was enjoyable exploring new water.  We even rowed up a tiny side channel, and were rewarded with about six fish.  Here I picked up a similar sized fish to Shane's first. 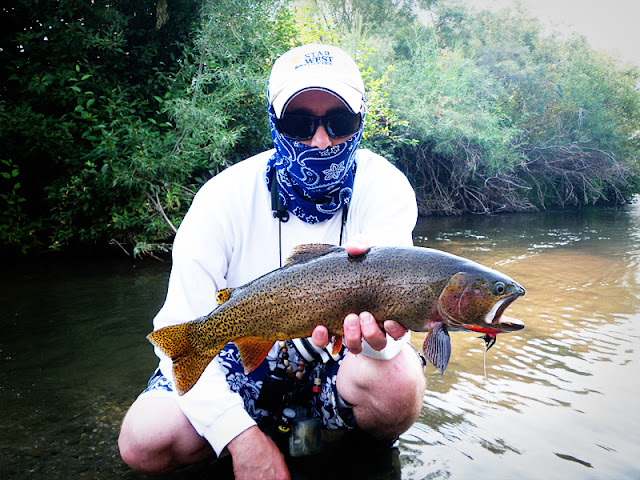 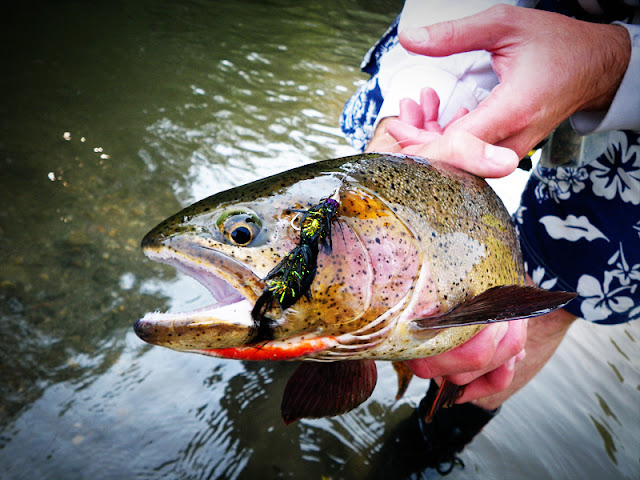 Things were looking good so far.  We kept fishing and floating, picking up fish here and there.  There was a crazy hatch that was hard to identify.  Surprisingly, no fish were up top. 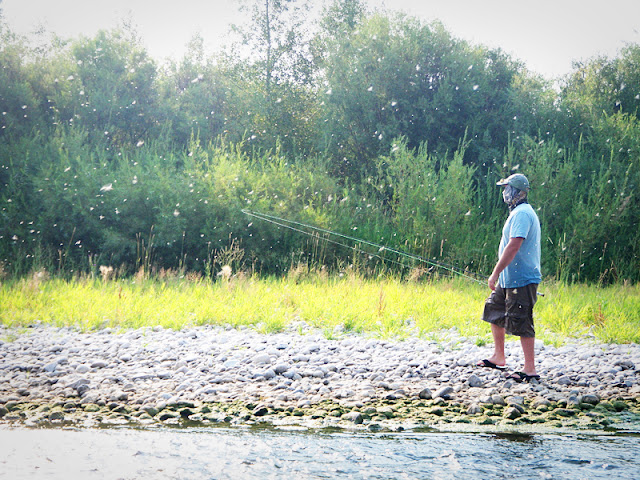 After rowing through some slack water and throwing a couple dries, we came to the money stretch.  We pulled the canoe to the side and began slinging the tandem streamer rigs.  I managed a healthy 17" bow pretty quick right were we stopped.  Shane headed to the other side and I worked my way through the hole to meet him.  Midway through I had the take I was waiting for.  Line peeled off the reel.  The fish fought hard and wouldn't come out of the heavy water.  It was a BIG fish.  A couple minutes into the fight the tension remained the same, but there was a sudden stop in movement.  My heart sank.  This wiley creature swam my trailing fly right into a large rock.  A couple more head shakes and then nothing.  I was heartbroken.  He stuck the fly well enough that I ended up breaking it off, which takes some doing with 14lb line.

Lesson #1:  Know the pros and cons of a trailing fly.  They can considerably increase catch rates, but also increase the snag-potential.  Bottom line: If fish are going for the lead fly, take off the trailer.

With the wind taken from my sails I followed Shane over to a diversion channel.  I picked up another healthy fish there, but was still brooding over the lost fish.  We decided to fish the hole back through to pick up the canoe and keep going.  I followed behind Shane again and worked the water methodically.  I placed one cast deep into some rolling water and few strips in I had such an aggressive take that my brand new BVK snapped!  It must have had a weak spot or something because it was in a weird spot about 3/4 the way up the rod.  I fumbled the 20+ inch brown in as best I could.  About three feet from my grasp the beast of a brown shook free and was gone.  I was livid.  The second potential two foot fish of the day slipped through my fingers and I was left with a busted setup.  If I were a cursing man my words would have been colorful to say the least.  After slapping the water repeatedly with the destroyed rod, and yelling indecipherable words, I decided to head back to the canoe and have a sit.

Lesson #2:  Always carry an extra rod.  A long float can quickly turn into an I'll-row-the-boat-and-work-on-my-tan kind of trip.

I had brought my 3wt for chucking hoppers, but it was useless with the heavy artillery.  Fortunately Shane had brought his 5wt for the same purpose as my 3.  He was kind enough to take his 5wt and let me use his 8 for the rest of the float.  It may be that he was nervous that I would break his nicer rod, but it was swell of him nonetheless.

After re-rigging the rods to the preferred streamers we began working our way down stream, looking for a good spot to stop for lunch.   We kept casting as the water still looked good.  Shane had a couple bumps so we worked the hole a bit more.  Swinging was making all the difference and seemed to produce more fish on the entire trip than anything else.  Shooting a long cast out there with a heavy mend, I let the line swing down and set into my third 20+ fish for the day.  The fish used the current and took a lot of line.  Shane headed down stream with the net to help me out.  After a good fight the fish was coming into some shallow water.  Shane went for it, worried that the shallow water would get the trailer stuck.  He had the fish in the net for a millisecond, but some things aren't meant to be.  A moment later and the fish was gone.  If I were a baseball player, that would have been strike three!  At this point I seriously considered giving up for the day (I can't recall the last time I felt that way while fishing.  In fact I don't think I ever have).  It was so painful losing such good fish in such a short period of time.

Lesson #3:  When possible, carry a large net.  There isn't any reason we couldn't carry a long handled, large net in the canoe.

A bit further down stream there was a large rock that Shane had done well by previously, so we headed there.  On one of his first few swings, Shane set into a great fish. 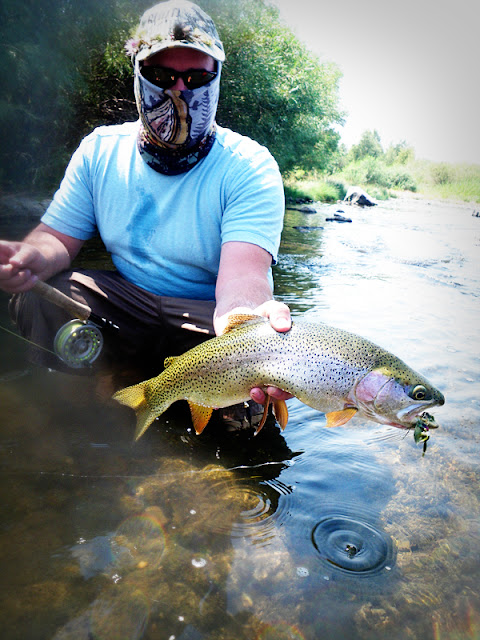 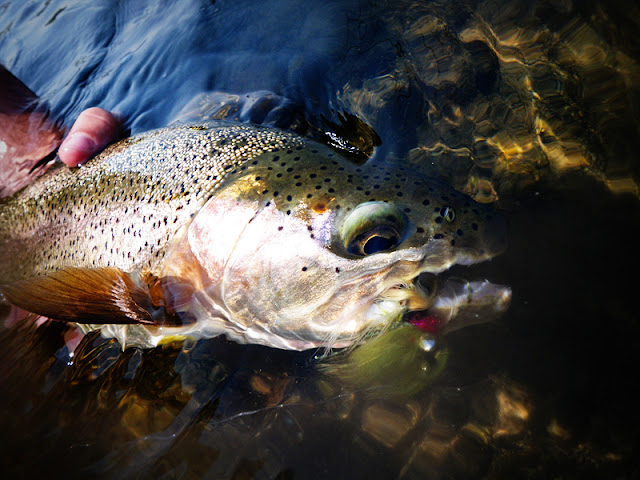 Believe it or not, on his very next cast out into the same run Shane set into another fish.  This second fish tore into the air and was another 20+ fish.  We must have had some bad juju because just seconds into the fight the fish shook loose!  Bogus.  I walked down river and Shane kept fishing the run.  He picked up another 16ish incher, and then we set sail once more.

It was midday and warm by now.  Hoppers were coming out, so I picked up the 3wt and started throwing at the banks.  There were some fun takes on it and surprisingly decent fish too. 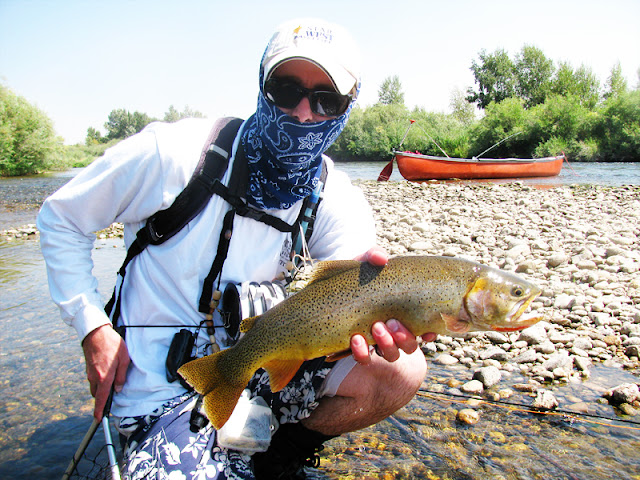 Fishing slowed down considerably on the second half of the float.  We still picked up fish here and there, but not as frequently.  We spent most of the day fishing streamers, interspersed with a dry fly here and there. 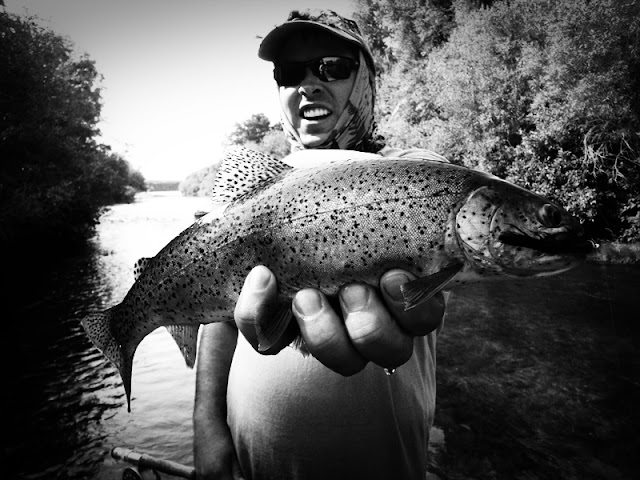 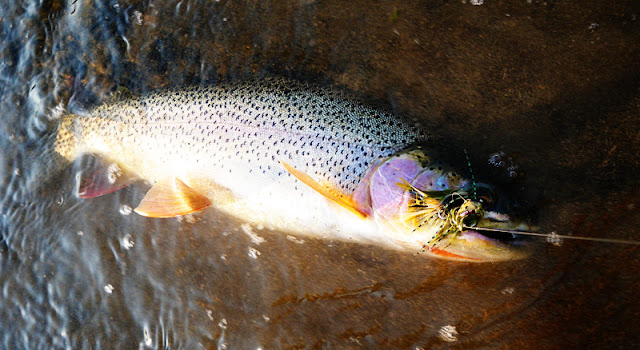 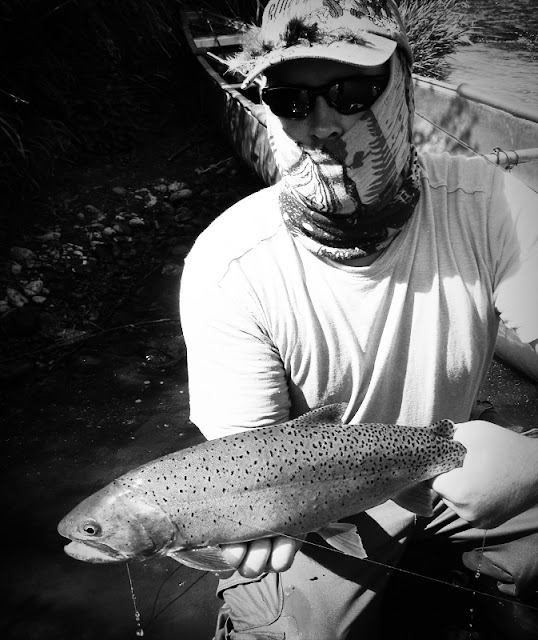 I don't mean to sound ungrateful, because it still was an awesome day fishing.  There were just a few lessons that needed to be learned the hard way.  Shane was kind enough to put up with my grumbling. 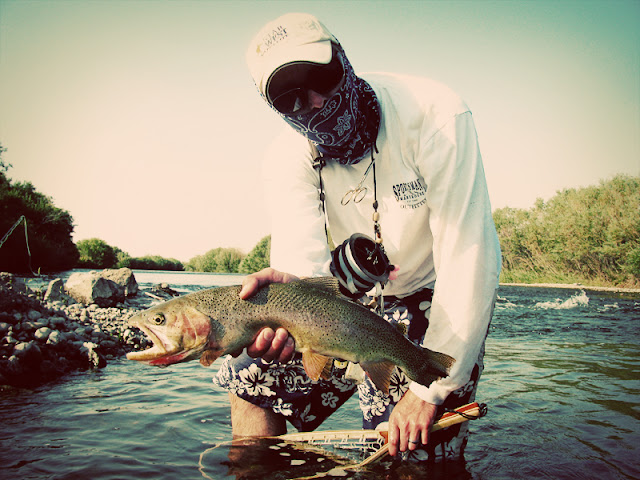 A few other lessons learned this outing...

Lesson #4: Always check your camera batteries.  Both of our cameras were out of batteries from the get-go.  We managed to eek out some pictures by shooting a quick pic after the camera turned on, just before it shut itself off.

Lesson #5:  Make sure you're protected from the sun everywhere.  My knees were fried!  I'll be investing in a good set of quick-drying wading pants this coming week.

Lesson #6:  Gauge the distance you are floating by the amount of time you want to fish certain areas.  A lot of the second part of the day was spent rowing to simply reach the end of the float before dark.  If we had floated a shorter stretch, we could have fished longer in the areas that were more productive.

Lesson #7:  Enjoy the whole experience.  Learn to laugh when things go wrong, and still have a good time.