We were lucky to get out early before any of the runoff started. Fished a warm spring area, and with the water lower it also stayed warmer in this particular area.

I'm itching to get out. Probably this next Monday? The water is just reaching the mid to upper 40's.
Posted by Chris at 11:10 PM 2 comments:

Got up at 2AM. Grabbed a couple last minute things and headed out the door toward Challis, Idaho. The plan was to chuck some flies upriver of Challis, on the Salmon River, in search of some Steelhead. We got there still with a bit of time to take a nap, but when we went into the local gas station the attendant notified us that the closest place to get a permit was back in Challis. I had my permit from the beginning of the year, but the buddy I had brought along was getting his first ever dose of steelheading. So we made the 30 minute trek back to Challis and then returned to where we intended to fish. Fortunately it had just gotten light enough to fish when we made it back.

We wadered and rigged up and got on the water pretty quick. Indicators, rubberlegs, and trout bead tailers were the setup. All but one fish for the day were taken on the rubber legs. It seemed to be the ticket, a darkbrown body, brown crazy legs, and a bright pink head. I had tied them up the night before and thought I would experiment.

After the first 30 minutes of fishing we hadn't touched a fish, but finally at the tail out of the hole my indicator violently bolted under water and BAM! fish on. It peeled off some line and started taking me down stream. After a fun fight I was able to land a beautiful 31" wild female. 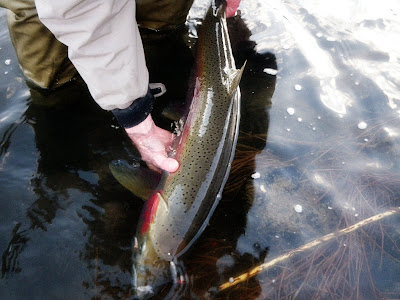 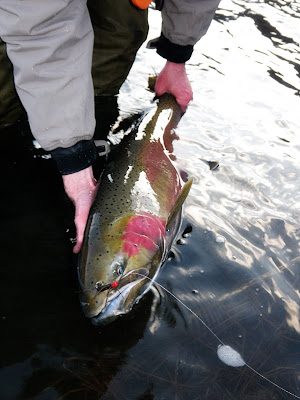 Caught some other small ones, but nothing to write home about. 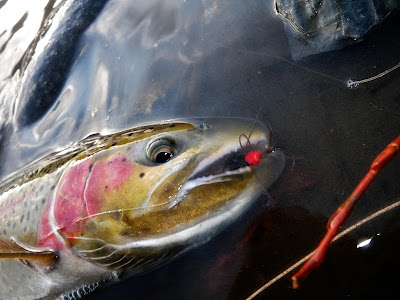 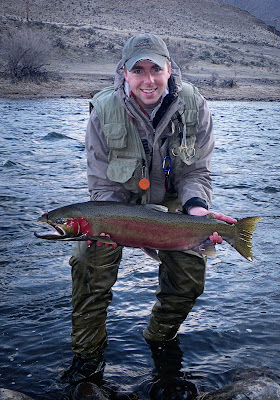 There are also some beautiful cutthroat trout in this river! And though I did not take any pictures of them, the whitefish are actually pretty cool looking too. 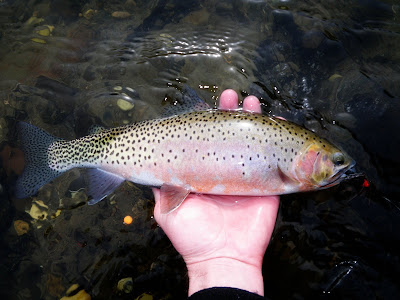 All in all, I landed 5 steelhead, 4 cutthroat trout, and a whole bunch of whitefish for the day. I think it was my last steelhead trip for this part of the season, but we'll see. Right now I have my sights on setting into some beastly carp. Here's hoping for some warmer weather and soon.
Posted by Chris at 9:13 PM 1 comment: 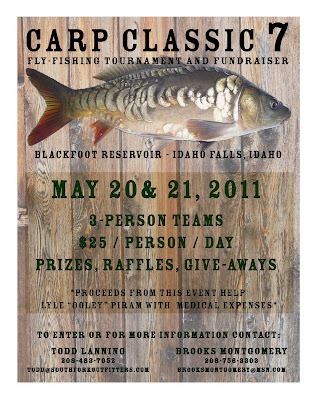 The Blackfoot Carp Competition is coming up!
Posted by Chris at 9:27 PM 1 comment:

I just stumbled upon this and though I've never fished this way, Peter instilled a desire in me to try it. He makes it look so easy, but I suppose that is how many fishing videos make it look. Gotta love the draw.