I slipped out the door around 3 and headed to the closest accessible water I could think of that had large fish potential.  Twenty minutes later I was bundling and rigging up.  The wind was blowing and a snow storm rolled in as I headed down to the water.  It took a little while to adjust to the direction of the wind and to the new Glacier Gloves (A great gift from a giveaway over on YGF's blog.  Thanks again!).  The gloves worked great once I got used their feel.  I was surprisingly toasty despite the conditions.  It's amazing what good layering can do for you, and how you can be standing in the middle of a river, surrounded by a blizzard, and feel completely comfortable! 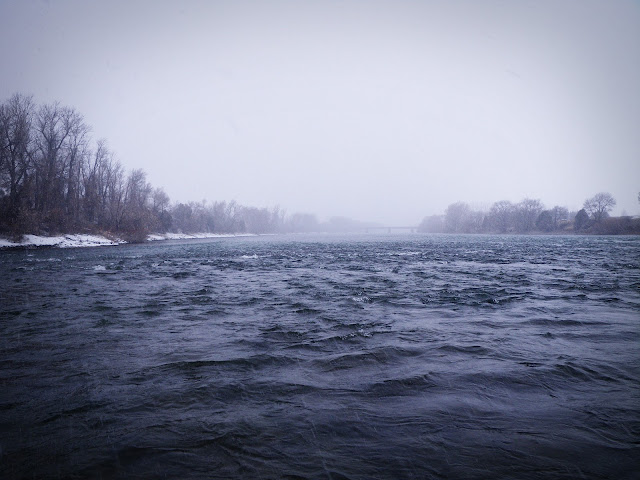 I threw a black streamer with a hares ear trailer for the first while.  Had one taker on the trailer. 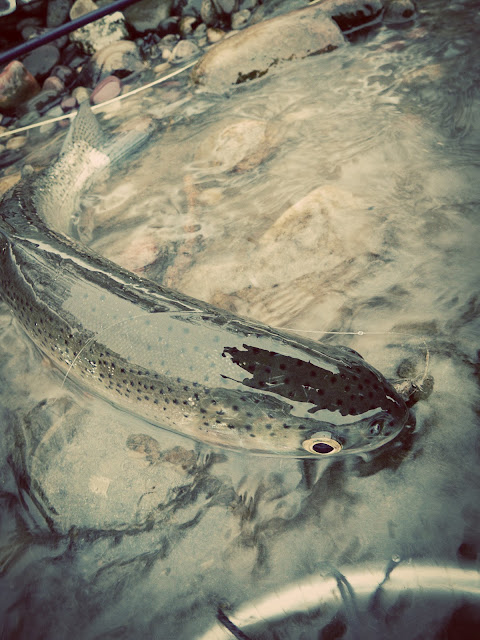 After a while I switched to a nymphing setup.  The good old brown rubber legs, pheasant tail, and midge setup.  I managed a few more medium bows.

After things had completely shut down I started my way back upriver toward my vehicle.  While wading against the current in the quiet cold dark I started pondering on the fish that were caught.  I analyzed the circumstances in which they were caught and what they were caught with.  I often do this.  It is part of the fun, trying to understand your success and learning to duplicate it.  But this time it occurred to me, the fish were caught on flies I had tied myself, and looking back I had trouble trying to remember catching a fish on a fly that I did not tie myself.  As goofy as it sounds, the realization felt good.  Something of a personal accomplishment.  I feel much more self-sufficient as an angler.  I'm no pro, but it feels good when you start to "get-it" for lack of a better word.

On another note, I just watched this trailer for an instructional video on European Nymphing and had to laugh a bit.  I kept expecting some car chase or explosion with the music they chose.  Maybe it's just me but I had trouble matching the music with the fishing, at least with the size of fish they were catching.