William said to me the other day, "dad, when can we spend some daddy-William time, you know, like mommy-William time only with you and me?"  I love that kid.  I love all my boys, and it is fun to watch them grow older.  It is also amazing to witness their differing personalities.  But one thing they all (at least the two that can speak so far) have in common is that they love to fish with daddy.  And what can I say, it's in the blood.  Thanks to grandpa Blaylock,  my own father, and now myself, they don't stand a chance where that is concerned.

So, what did Will and I do the very next day?  Spent some quality daddy-William time harassing some local trout.  Pretty trout too. 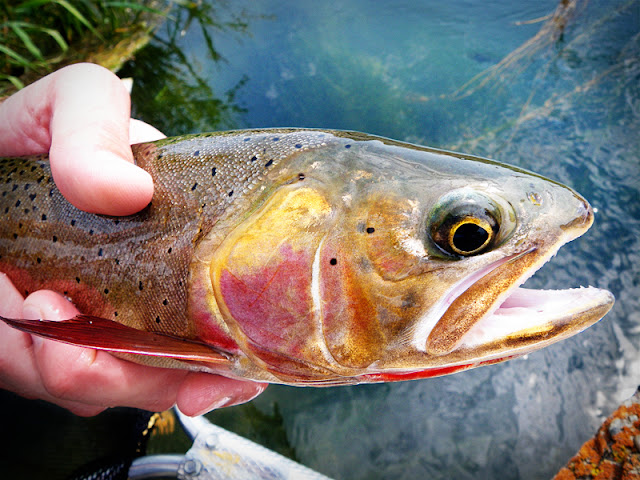 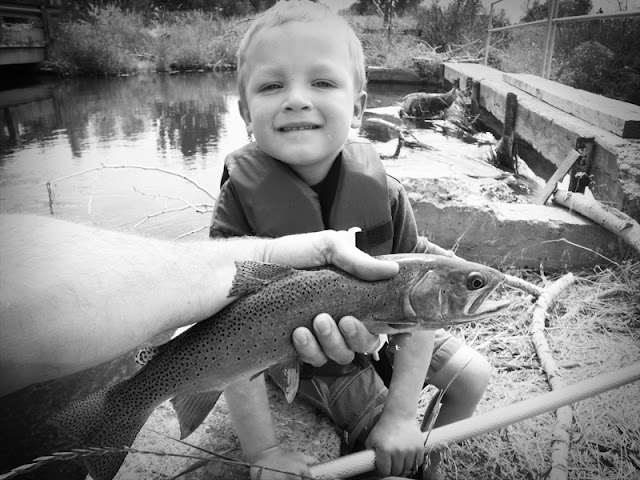 This kid loves to fish.  It is unfortunate that he has pretty sensitive skin because holding fish causes him to break out in hives.  I imagine it will go away to some degree as he gets older, but it sure is a bummer now.  We work around it and he gets to do everything but touch them. 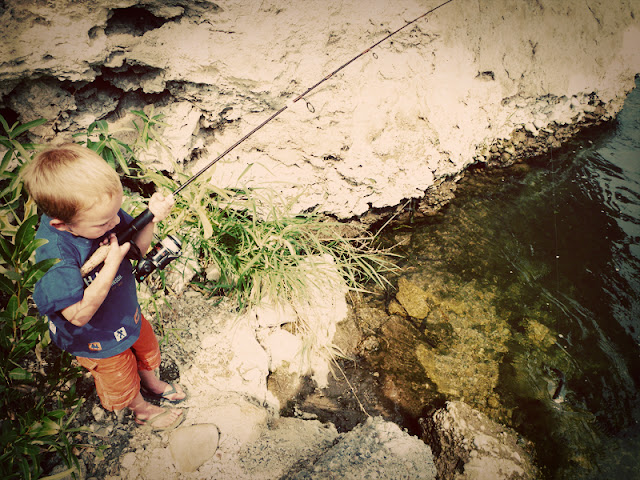 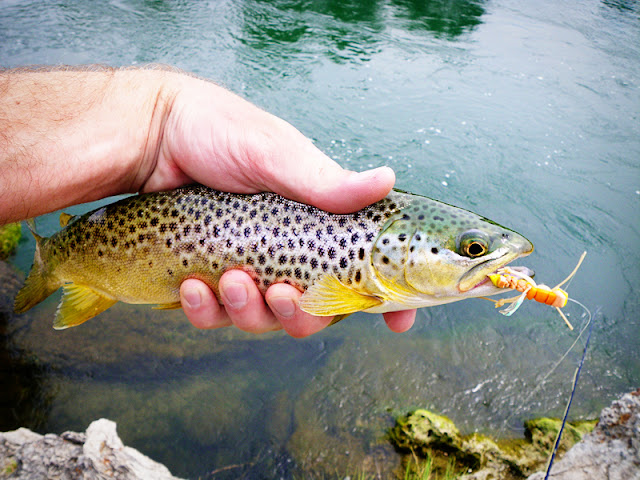 We mostly caught grasshoppers on the banks of the river and used them as bait on our spinning rods, but I couldn't reset throwing a fly for a little bit.   Will enjoys catching grasshoppers almost as much as catching the fish. 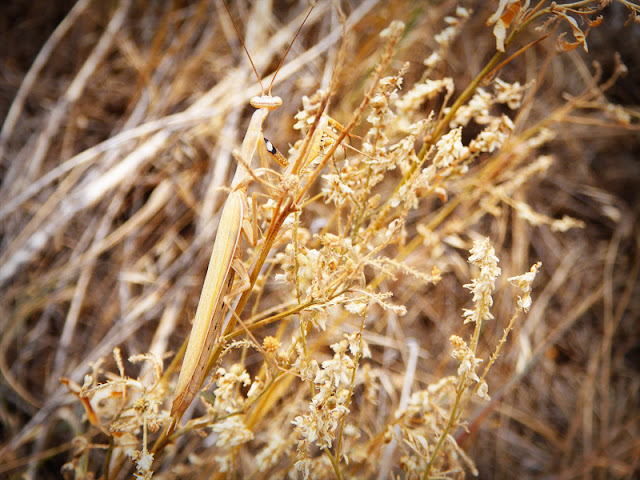 We also happened to see a fair amount of preying mantisisis... manti... well they were pretty darn cool to see. 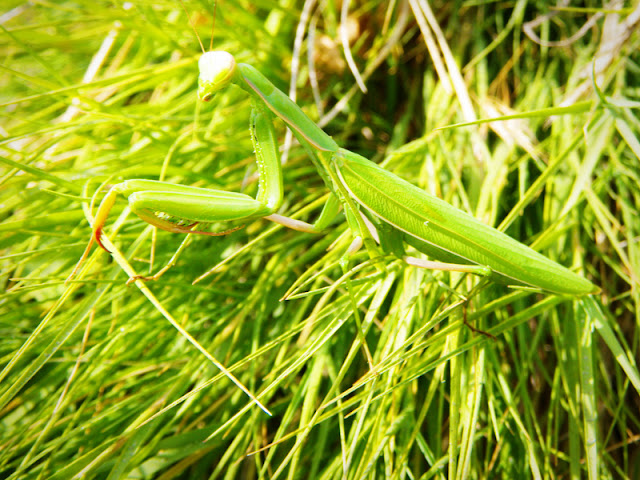 It was great to spend some time with William on a one-on-one basis.  It gets a bit more difficult with multiple children, to still give them the individual attention they crave.  Love that kid. 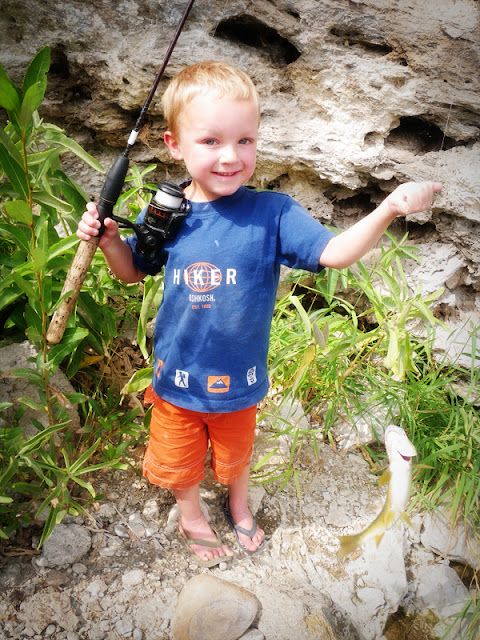 Trip and tail #2 "Carp with friends"

Withdrawals: Anyone who has had a good fly-carping experience tends to have them when they aren't catching carp.  I had not been to see my fine barbel-mouthed friends since spring, and the drive to be re-united has been growing stronger.  Plans to chase some this week had already formulated in my mind, but had not fully solidified as of mid last week, but when my new carping fly rod broke, that premeditation went up in smoke.  It was only a couple days later that some sunlight burst through the carping clouds, and Brent Wilson (from the Uprising blog) came to my aid.

Brent extended an invitation to come along with him to chase some gold, and very generously offered one of his rods to borrow.  I was extremely grateful, and quite happy to be after these awesome fish again.  Shane came along and we all spent the day stalking some very wary fish.  We all managed to get into at least a couple, and Brent (being the carping animal that he is) stuck even more.

The first half of the day I was shooting long casts out to areas I knew carp were cruising and looking for food.  There wasn't too much tailing going on that I could see.  After missing multiple little bumps I decided that my bright pastel-pink fly line was spooking fish.  At that point I had to regroup and decided to work the fish I could see (which isn't usually necessary in the spring).   My short game paid off and shortly after changing tactics I began hooking up.  From what I can tell, the shorter casts allowed me to control where my fly line was going and use more of my leader and less actual fly line.  It made all the difference.  Brent had a pretty sweet bone-fishing line that has already been included to the wishlist. 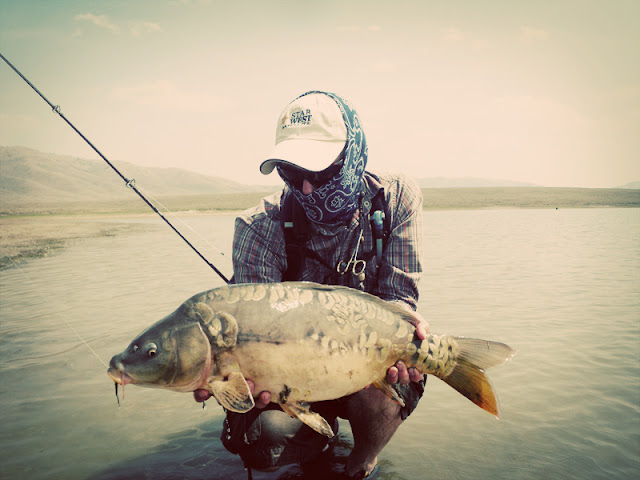 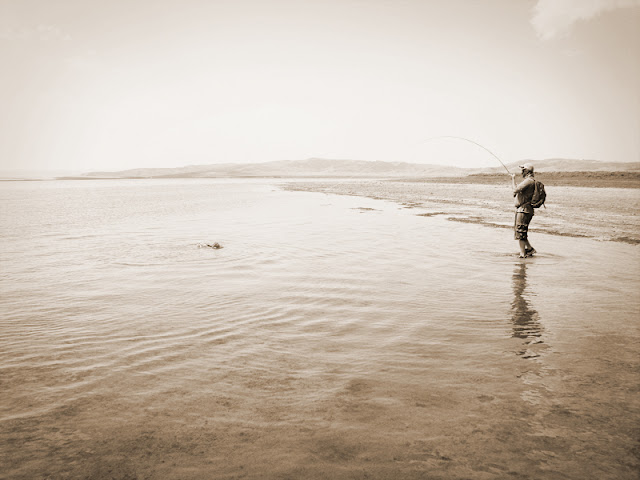 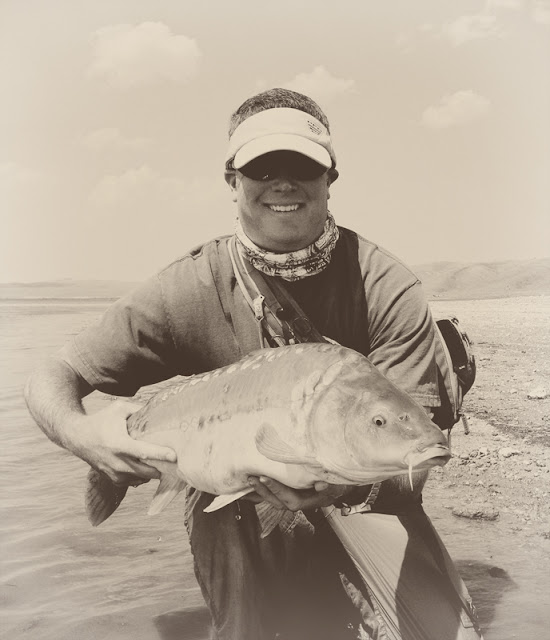 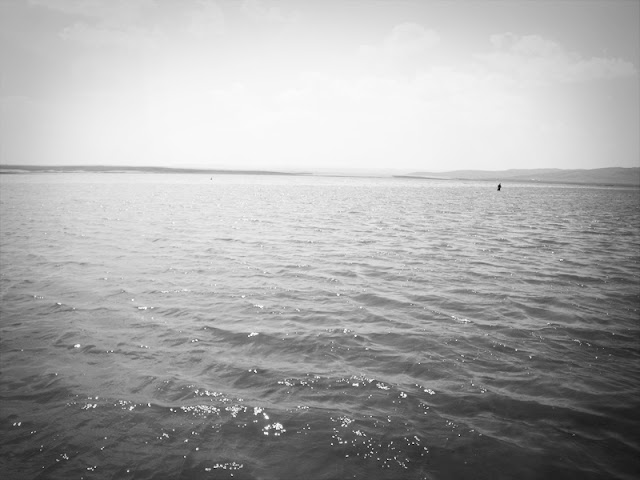 The carping was more difficult than the spring, but in some ways that makes the whole experience that much more gratifying.  Easy fish are fun, sometimes.  But sticking a fish that made you work for it is like owning something that is all paid off.  I'm sure that makes sense in some way.

It is always great to learn from other fishermen.  If a guy is willing to ask questions and observe others techniques, there is a lot to be gained.  Thanks for the invite and loaned equipment Brent.  Hopefully my replacement gets here soon and I'll be back at it.  I'm already going through withdrawals.
Posted by Chris at 10:21 PM