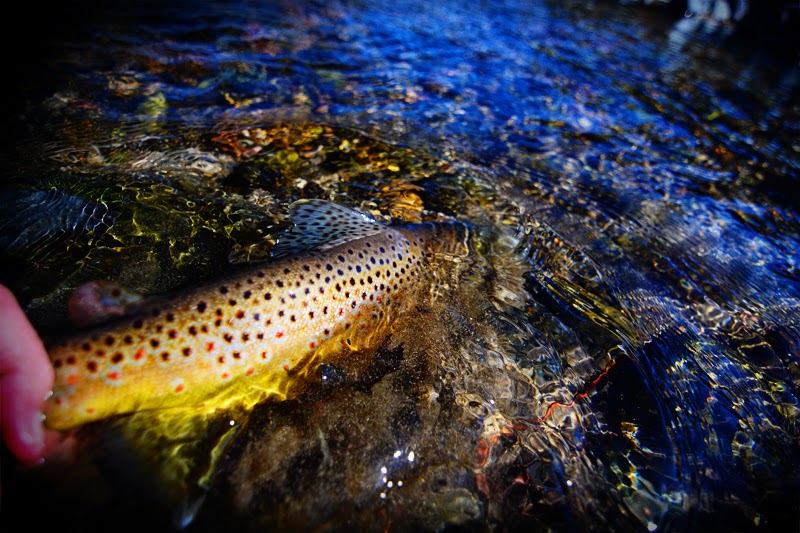 The other day while I was meandering down the river bank, I saw what looked like an arm sticking out of the water.  As I cautiously approached the frightening spectacle it began thrashing about, back and forth in the water, making quite the scene.  Seconds later the hairy arm plummeted into the depths. Suddenly a brown trout the size of a small bus leapt from the water with a gurgling growl. Knowing the only chance I had to save the poor swallowed man was to catch this behemoth with my fly rod I quickly pulled out my flies. In haste I tied on the largest fly I had in my box, a ten inch articulated monstrosity. Casting ahead of the massively waking fish I began stripping line with a messy madness. The wake followed. Moments before the fly reached the bank, the water exploded and it was quickly apparent the giant was chasing me, not my fly. I threw my rod in desperation and grabbed the behemoth's mighty, kyped jaws. During the struggle the great brown gagged and spluttered, causing it's last would-be meal to fly out, knocking me to the ground. The fish thrashed back into the water, and as I got to my feet I found myself standing alongside Sasquatch.  He thanked me for my help, and with a polite nod, sauntered back into the trees. I'll never forget the day.

Now I know this sounds completely legit, but I have to admit, it was a lie. It was actually a rainbow trout. As entertaining as lies can be, this post is not about that kind of lie.

I'm a firm believer that understanding a fish's behavior improves an anglers ability.  Maybe it isn't true, but the belief comes from personal experience. Fly fishing is all about learning what flies to use, when to use them, and how to get into the zone with the right fly movement, or lack thereof. Every bit of the process is focused on trout behavior. We anglers look at how they act, so we know how to act in the hopes that they will react in a positive way.

When I began my untrained trek into the world of fly fishing, I was daunted. I didn't know much about insects, fly lines, leaders/tippet (still get a bit confused on the X system to be honest), wet flies vs dry flies, and a bunch of other aspects surrounding the sport. It has been a wonderful journey of discovery, filled with a lot of trial and error.  If you are just getting into the sport, or are considering it, don't give up when things don't come easy.  All the messy days spent learning add up to some pretty spectacular days on the water where everything falls into place. If you are an experienced fly fisherman, don't get stuck in a rut.  Keep learning, exploring and trying things differently.  The payoffs get better and better the more you know.

Some of the first valuable lessons I learned in trout behavior came to me while watching "The Underwater World of Trout" by Wendel (Ozzie) Ozefovich. I highly recommend the four-part series to anyone interested in underwater trout behavior. It appears that much of the filming takes place in smaller stocked streams, but I think the principles Wendel comes up with still hold true for general trout behavior in most places. The videos are super dry, but worth their weight in gold.

Have you ever stopped to think why the prime spots in the river are prime? I once heard the analogy that rivers are conveyor-belts for food, at least to a trout's perspective.  This is the case in most bodies of water with moderate to fast currents.  (In lakes and rivers with very slow current, fish have to move to find food and this principle applies a bit differently.) Factory workers who deal with conveyor belts on a daily basis may have some idea about trout behavior and not even know it; especially those who deal with any kind of conveyor-belt sorting.

In some ways, the worker who stands at the head of a conveyor belt has the easiest job when it comes to sorting. At the end of the day they get the same pay, but are not as tired. They don't have to look nearly as hard to find the things that should be pulled out. Similarly a trout, whose survival depends upon what the conveyor belt brings his way, wants access to the juiciest, most protein packed meals before any other trout. This gives way to a "pecking order." The biggest, strongest fish acts just like the bully on the playground.  He gets first dibs on what would be other kids' lunches.  This is why the head of a lie (top of the hole/run) usually holds the largest fish.  The head of the hole is the prime spot because it is usually where the juicy morsel of food is first presented in an easy-to-eat fashion, and the biggest/toughest fish knows this and claims that spot as his territory. This is the same case at night, as well as during the day.

If the biggest fish is caught or leaves that preferable lie, the next biggest moves right in to take it's place.  This is often why we anglers can catch multiple fish in one particular spot.  Usually the largest is first, then they can get progressively smaller.

It all comes back to the hierarchy of lies, and not the ones we tell our fishing buddies. We need to think about the three big lies: protective, feeding, and prime (a combination of the previous two). If we were to place them in a hierarchy, or list of priority and importance to the fish I would say that they first want a protective lie, then a feeding lie, and if possible they will gladly take a prime.  What we fail to realize, or at least think about (because most avid fisherman already fish to this principle) is that there is a hierarchy within each of these lies which stems from the natural pecking order trout follow.


So what's the point in paying attention to these details?  Understanding this pecking order, with the accompanying preferable places to hold helps us make a game plan to fish these lies. Decide if you are going for quantity or straight for the biggest one in the bunch.  If you are aiming for numbers, or just really want to cover a hole, I would start from the bottom and fish my way up, trying to play fish away from the rest of the hole.  If I were looking for the king of the hole's hierarchy, I would work the head first, take a few swings through the tailout for any straggling peasants, and then move on.

A Case For The Weighted Streamer

Knowing this information about trout behavior has pushed me to work the head of the run pretty hard. Quite often the top of a good hole is also a prime lie. Fast water, lots of oxygen, and rapid drop-offs aren't uncommon. As a prime lie, sometimes these places are tough to fish.  If I didn't get a grab the first few times through, chances are I need to go deeper.  The head of holes can be tricky to fish because of the fast current. That king fish in the pecking order is usually sitting in the soft pocket just under the turbulent stuff (think of a king safe and sound in the throne room).  In really fast, roiling water, no sinking line can make this zone accessible without casting upstream and letting the line swing deeply, because the line is at the mercy of the current, even if it sinks fast.  And when going for the deep swing at the head of a hole, there is a high likelihood of getting snagged. For these cases I prefer a very heavy streamer and a floating line (forgive me Mr. Galloup).  The streamer can cut through the water column and the floating line reduces the drag and keeps the fly from getting snagged.  Think of it as a kind of streamer/nymphing hybrid because of the vertical nature of the initial presentation. The presentation of the fly is not terribly natural, but it gets in the sweet spot, and I'm not terribly convinced that a minnow wouldn't be getting pushed around in the current in an unnatural way anyway. It sounds odd, and most fly fisherman shy away from fishing very heavy flies, but it's one way of stepping out of the box. Very few anglers access these zones, and the few that make the effort will find themselves greatly rewarded.

I tie my own patterns for this special kind of situation (Magic Dragon and Skullcracker), but a simple modification to popular patterns like the Sex Dungeon will yield similar results. Just substitute the usual dumbbell eyes for at least the 1/4" Ibalz.  Collin Carlson's Provo Hooker is also an excellent pattern for such circumstances. Throwing weight to access these lies, which sit at the top of the fishy hierarchy, can take some adjustment. It takes extra care not to shatter your rod, or crack your skull, but the awkward transition pays dividends. Chuck and duck, as they say, can make it a big fish day. Just make sure you duck. And mind the hierarchy.