Steelhead: Play To Your Strengths

Steelheading in the fall with a single handed fly rod is tricky business, at least it is on the Salmon River in Idaho.  It can be done, but there are precious few places where it is productive.  The fact is, the fish are in deep/fast water that requires a very quick sink rate and the fish hug the bottom.  In the spring when the fish have moved up into the skinnier water there isn't any reason to use a casting setup.  Fly fishing during those times is often more productive anyway.  During the fall, when the the fish are much lower in the river, a casting setup tends to me more productive.  You can fish more places and get deep down to where the fish like to stay.  For this reason I have not been after steelhead in the fall for the past couple of years.  I prefer to fly fish for them.

Shane had expressed some interest in a fall trip and we were both out of classes for the holiday.  The steelhead taste much better in the fall than in the spring, and I have been craving some since the last fall trip (rarely keep them in the spring).  We decided to make one of those crazy (read exhausting) there-and-back-in-a-day trips.  These trips are tiring because it is about a 4 hour drive (one way) to some of the better fishing locations.

We set sail around 10:30pm Tuesday evening.  The plan was to sleep in the truck once we arrived and fish all of Thanksgiving eve.  The roads were nice and clear on the way up, if you do not include the many deer and elk we encountered.  We arrived at almost 2a.m.  Having discussed the idea on the way there, we decided to try a bit of night fishing.  It was relaxing casting in the still of the night under a beautiful starry sky.  After a couple hours and not so much as a bump, we decided to get some sleep.  We kicked the carseats back and hunkered down for a couple hours of rest.  What felt like minutes later we found ourselves getting out of the truck and rerigging our lines.

There are really only two basic rigs that I would consider my go-to setups when using a casting rod for steelies.  I use P-Line CXX 10lb mono, a small piece of pencil lead with a hole punched in it, two swivels (one with and one without a snap), small hot orange corkie, small black curly tailed grub, size 4 Gamakatsu octopus hooks, and pink or orange troutbeads (with toothpicks).  I have tried roe many times, but I have little confidence in it, though it works really well for other anglers.  Plus I prefer to avoid the mess and maintenance of bait if possible.  The setup I use the most is to put the corkie and small black curly tailed grub as the lead, then follow it with a single orange trout bead.  The other setup is just two trout beads.  The top I use a pink and the trailer I use the orange (4mm beads).


After rigging up we started zinging casts out across the river.  It has so far been a warm winter, and this was evident as the rain clouds slowly worked their way through the canyon.  We were sopping wet within the first hour.  Not too long into our fishing I felt that indescribable steelhead take, and set hard.  Half of the time these takes turn out to be the river bottom, but this was no rock as the heavy throbbing headshakes immediately comfirmed.  I had forgotten how hard they fight in the fall.  After a 5ish minute battle, Shane scooped the net around this dandy of a hatchery buck.  The stress of potential skunk was gone, and I felt the freedom to just fish the rest of the day.  It's amazing how liberating and relaxing landing that first fish can be, especially when steelheading. 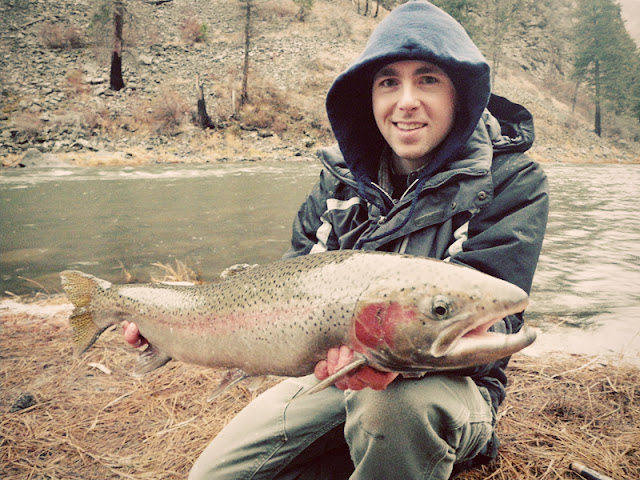 We kept fishing that hole for a couple more hours.  Shane was still trying to get the feel.  It was his first time using anything but a fly rod for steelhead.  We only landed one other fish in that place.  It was a nice wild buck that fought hard.  After a little while longer and no other fish we decided to move upstream. 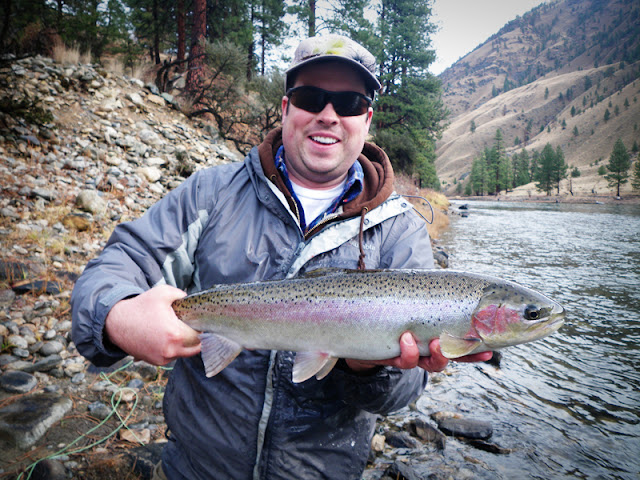 At our third location we both managed a bit smaller hatchery hen.  The cool thing about Shane's was that he picked his up on his fly rod!  After fishing this spot for a while with no luck, he said "I'm going to try nymphing.  It's what I have confidence in."  The lower section of the hole was pretty deep water and after fishing it for a while I suggested he try the top of the hole where it was shallower before the hole drops off.  He moved up there and after only a handful of casts in the riffles he yelled, "Chris!"  I threw down my rod, picked up the net, and ran up to him.  We netted the bright hen, and though it wasn't the biggest fish of the trip, it was the coolest because it was taken on the fly.  He kept at it for a while, but only managed a small sucker.  We finally decided to move again.  The rest of the day we did more scouting than fishing.

Finally, as dusk was slowly setting in, we stopped at the last fishing location for the trip.  After a few casts on the spinning rod, Shane went back to his fly rod.  I decided to stick with the casting and kept working the opposite bank.  A large snow storm started moving our direction.  Things had cooled down quite a bit and the rain had turned to snow.  It was looking about time to call it a day.  Shane had headed back to the truck to take his waders off and get warm.  I kept telling myself, "one more cast."  It's crazy how far we push ourselves for the things we love to do.  It was now just barely light enough to make out the dark silhouette of things.  I told myself (in honesty this time) that I was making the last cast.  I decided to rocket it over to the known snag of the run, on the other bank (I had already sacrificed one whole setup to it).  I thought to myself, "who cares if I break off, it will save me the time of cutting everything off!"  The line whizzed in the darkness and I heard that characteristic "plunk" in the water.  A few moments into the drift there was a heavy take!  I thought I had snagged a squaw fish or sucker, but seconds after this thought crossed my mind the beauty of a steelhead flew out of the water.  By it's silhouette against the river I could tell it was a respectable fish.  I hollered at Shane for some net help, but he was comfortably in the truck by this point and could not hear the yell.  I picked up the net and proceeded to do my best at netting in the dark.  I pulled the fish to the bank and scooped with the other arm.  It was done.  I was in shock.  Last casts like that don't happen often, but what a great way to end the day.  I was so surprised with the whole thing that I didn't think to get a picture, but it was just as big as the other two dandies from earlier in the day.  A thick and healthy hatchery hen.

We made our way home slowly as the snow was now everywhere.  It was a fun trip and a great way to kick off the Thanksgiving break.  Shane and I are already trying to make it work for a trip back.  We are trying to think of the best way to make it happen with our fly rods.  These last few weeks of school are the busiest, so we'll see, but here's hoping.

There is something to be said about confidence and fishing.  They are two interconnected concepts when it comes to the sport.  Rarely is success found when they are separated.  Building confidence in a new approach to fishing can be quite frustrating, but if we stick it out the rewards are fantastic.  The more areas a fisherman can become proficient in, the better angler they become all around.  Fish are fish, and they do not change their behavior according to whether we have a casting, ice, spey, spinning, or fly rod in our hand. They couldn't care less.  So as the angler we ought not to ignore or criticize other methods as long as they are sporting.  I say play to your strengths, but do not be afraid to strengthen your weaknesses through trial and practice.  Enjoy various methods of fishing, and you will be a better fisherman all around.  I think of Jeff Currier as an excellent example here.  That man can catch fish anywhere and everywhere with about any method.  He gets fish and loves catching them, and he.... GASP......ice fishes too!  How cool would it be if we were all that chill, pun intended.  Enough of the soap box, here's the scenery shot.