It's Good Fishing For A Resaon

There are hidden nuggets of fly fishing gold scattered all over the world.  What keeps them from being pillaged and plundered?  In a word, work.

Not all fishermen are the same.  (Insert "DUH" here.)  Like anything else in life, people are all over the spectrum.  Most are content to access the easy and convenient, while another smaller group are the complete opposite.  They are those who search hard and relentlessly.  They are not afraid of fishless experiences and mistakes.  These few are the gold-diggers.  The kind that would make Kanye proud.  And the source of their wealth... it's work.  The difficult access, the uncomfortable situations, the dangerous moments, these are all things many fishermen avoid.  I see no curse, but a blessing.  In a world where information is ridiculously accessible, less and less "gold" is hidden.  The only thing that keeps special fishing sites safe is that it requires a lot of effort to get to them and back.

Be warned, if you put forth the effort to find spectacular fly fishing, you too can become hooked.  Memories, ideas, and visions of untapped gold do not leave the mind easily.

So when Brent extended the invite to chuck a fly at monstrous moody macks and brooding behemoth browns, the idea was too much to pass up.  Sure it was supposed to be a long hike, and the weather called for rain, wind and snow, but has that stopped us before?  We looked at the situation and thought the fishing would be all the better for it.  For the potential grizzly problem we decided that we would yell at them, and if that didn't work we could pull a Hank Patterson.  Oh, and we had pepper-spray and bear-bells if Hank's advice didn't work either.

Fog and rain accompanied most of the drive there.  We geared up and hit the trail.  It was here that I learned that neoprenes are not meant for hiking.  In fact, unless you want some resistance training on top of a long hike, I would suggest you opt for the breathable waders.  Chafing, a little out of breath, and dang sweaty we reached the water.  The first site we beheld was this amazing full rainbow. 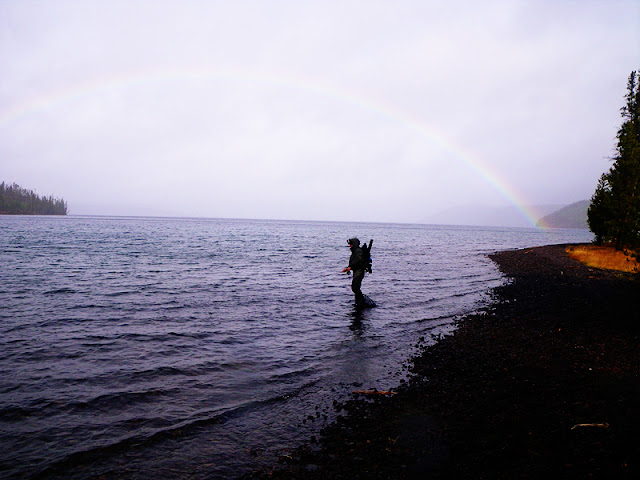 We quickly set to work prospecting for the unseen lake trout.  When we located the schools holding in shallow water they were pretty skittish.  The large streamers we had prepared for large aggressive fish were simply spooking them.  Shane was the first to pick one up on a small streamer he had tied. 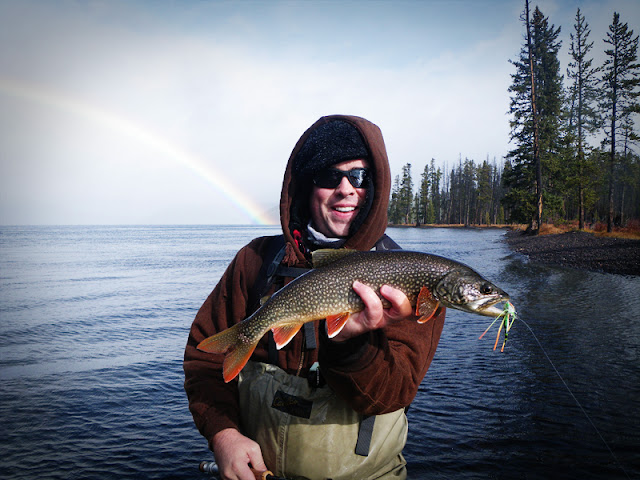 After a relatively fruitless hour, and only a few half-hearted chases to show for it, we accepted the situation and switched to egg patterns.  It was the trick and we managed to pick up a handful more.  We lost a couple decent ones, but nothing worth bragging about.  After we each set into a mack, and had spooked up the school enough to shut them down, we decided to go in search of some browns. 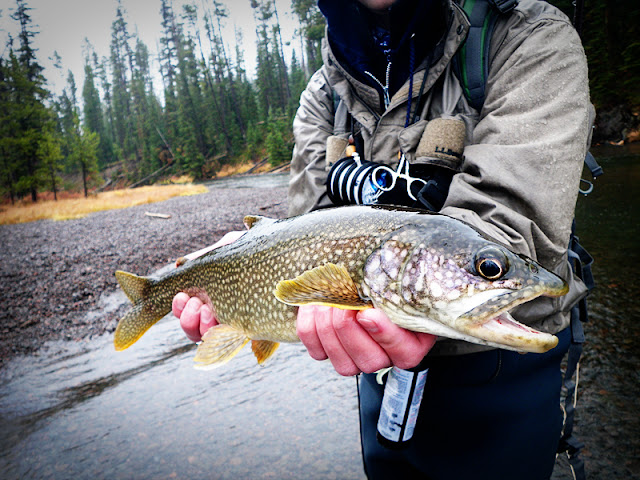 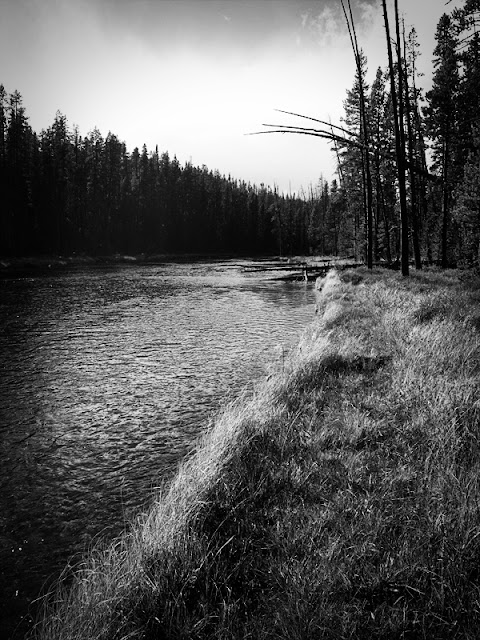 It took a little while to figure out how to entice them to bite.  Initially they showed no interest in what we were throwing.  Black streamers, eggs, and nymphs were all being ignored.  Finally I decided to throw on a Magic Dragon (large sculpin pattern) and had an immediate take.  Three missed fish later I headed down river to catch up to Brent and Shane.  Brent had just lost a very large fish on the jump, rats!  We worked the river down and then back up with intermittent success. 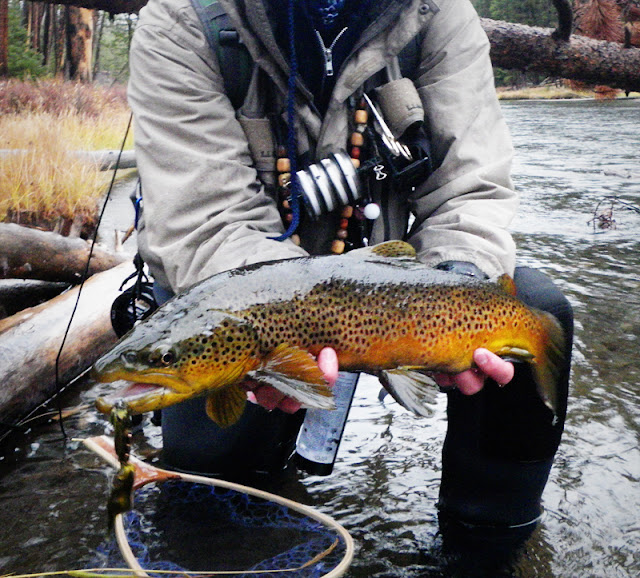 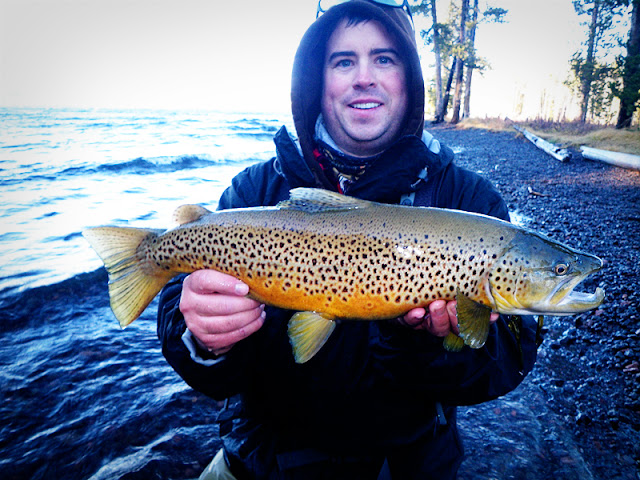 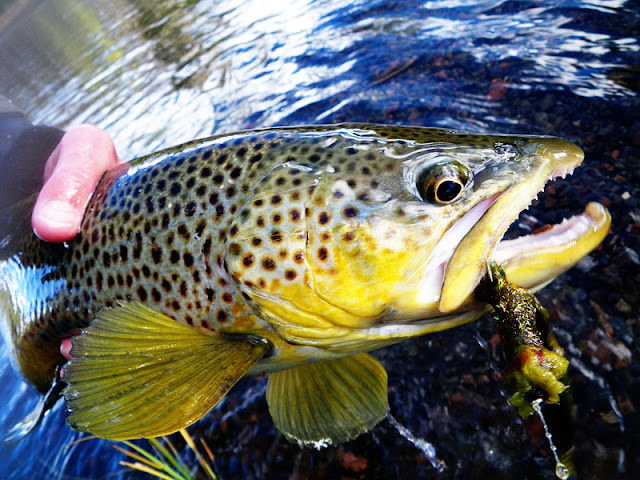 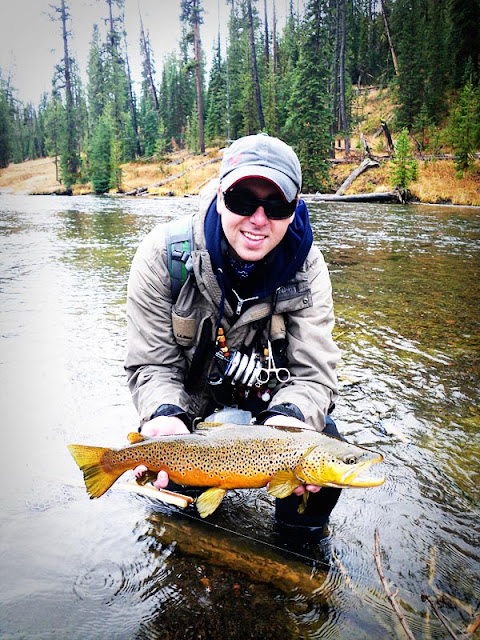 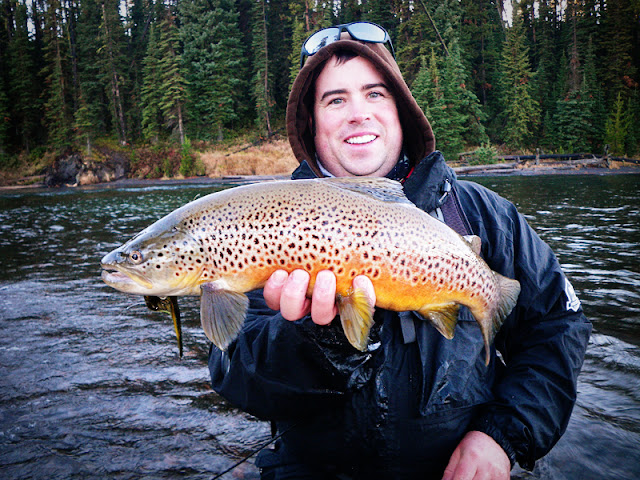 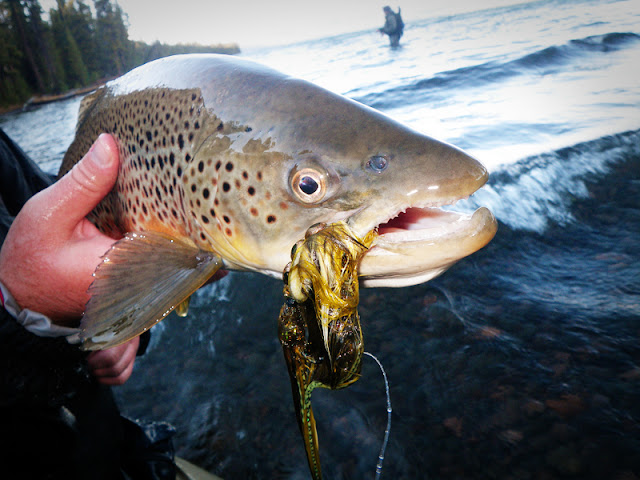 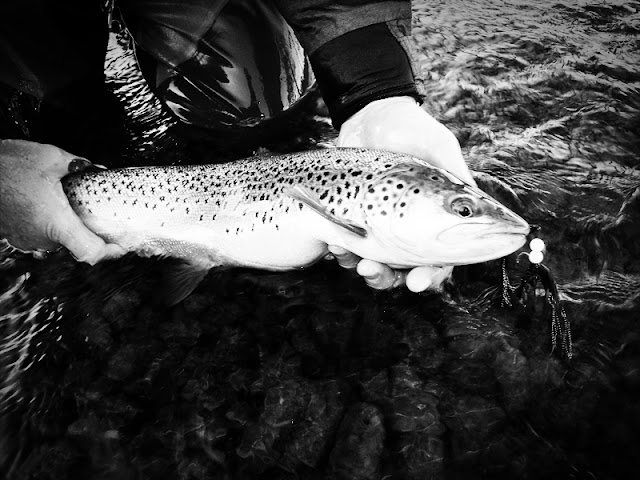 We were headed out just as the sun was approaching the tree covered hillside.  The hike back out was grueling.  It seemed to go on forever!  By the end of the hike the temps had dropped enough to freeze our still tied on flies.  We also had a close encounter... with a log.  We thought it was a bear and we were all ready to spray it, but after shining a light at it we all sighed in relief.  The large black silhouette in the path honestly had looked like it was moving. 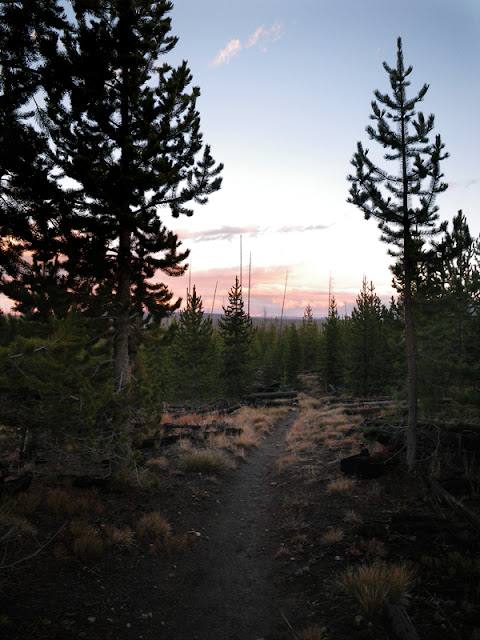 It was beautiful country, and though I can't recall ever being that exhausted in my life before, I would do it again in a heartbeat.  A 14 mile round trip hike is a lot to do on two hours of sleep.  Maybe next time I will have learned my lesson and will get everything ready sooner!

Brent has a great write up on the trip also.  He's a great guy and remarkably patient with my rambling while fishing.  I imagine Shane will have a post up soon too.
Posted by Chris at 10:05 PM 7 comments: