Using a water balloon for an indicator is certainly not a common method.  The technique may sound laughable, novel, clown-like, or maybe even redneck.  Having fished mostly Thingamabobbers throughout my nymphing career, I was surprised with the first time I decided to give balloons a try.  They were more sensitive to bites.  I could see what was going on at the end of my line a bit better than with the traditional trapped air/grommet prototypes.  Balloons are lighter, which allows them to move around more easily within the water.  They are also more supple, which allows you to more easily identify whether your flies are running along the river bottom or being nibbled on by an unwary fish.

After my first experience with balloon indicators I noticed a couple drawbacks.  First of all, the traditional way to connect them to the line is to create a slipknot/loop in your leader and cinch it down next to the knot on the balloon.  (Previous Post About It) While this technique works, you cannot move your indicator back and forth without redoing the whole setup, which makes it hard to cover the water column effectively, and the knot kinks your leader quite a bit. Because of these two problems I decided to stick with the good old versatility and ease that Thingamabobbers provide.  At some point I even tried out some alternative balloon methods, like Depth Skru, but I was not very thrilled with the results.  The Depth Skru balloon setups seems like a good alternative, but when I actually fished them I found they were more of a hassle, especially in colder weather.  I decided balloons were just not meant to be in my indicator arsenal.  That was until a few months ago.

Recently a new indicator setup came to my attention.  I say new, but the concept has been around for quite some time now, though I only saw the advertising a few months ago.  It is the New Zealand Indicator setup, which is essentially small plastic tubing with yarn.  There is even a fancy tool for those willing to spend the money.  The following video shows how it works.


After hearing about this setup something sparked in my mind.  I asked myself, why couldn't this be used with balloons?!  So I tracked down some 2mm plastic tubing, cut up some small pieces, dug out an old stash of water balloons, and hit the water to experiment.  And you know what, IT WORKED!  Since then I have been using the setup, with great results.

The how-to is simple.  It is just how the New Zealand deal works, but with a water balloon instead.  Instead of using the fancy tool, I just pinch the line and slide the 4mm chunk of tubing over the line, I blow the balloon up to the desired size, tie it off, slide it through the loop in the line, cinch it down above the knot in the balloon, and nip off the section of balloon below the knot. Also, wetting the bottom of the balloon with your mouth or the river before inserting it can help the balloon slide into the plastic tubing and into place, but if you are too lazy for that the river and inertia will take care of it for you after a couple casts. 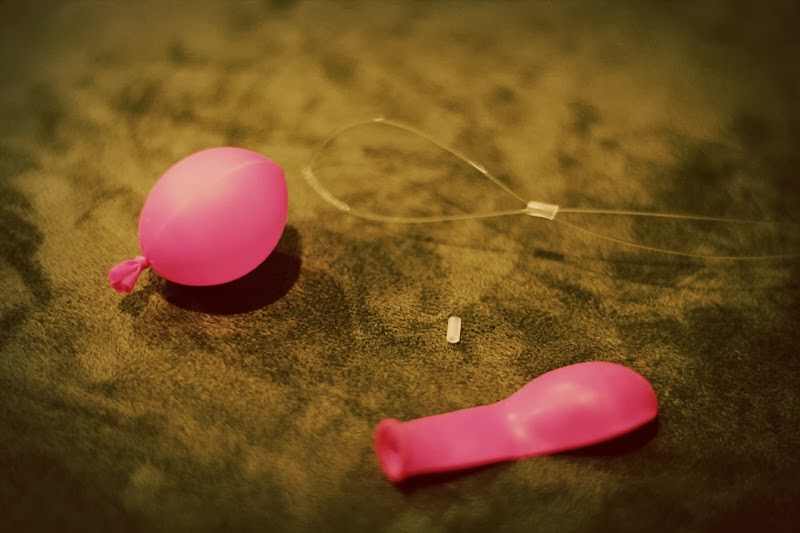 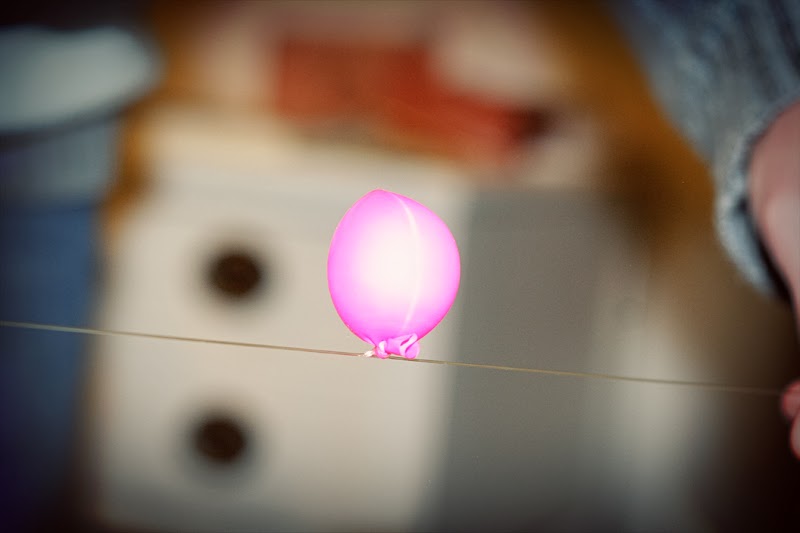 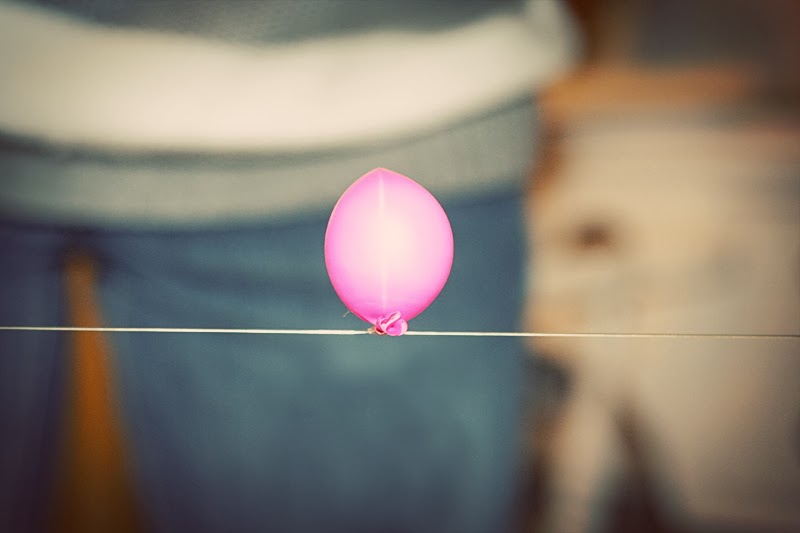 One other drawback about balloons is that they are harder to cast in the wind.  This is a result from their lighter weight.  With that in mind, know you can usually get away with a smaller size of indicator (as compared to the Thingamabobbers) because the balloons are lighter themselves.

For the tubing, you can get some directly from SrikeIndicator.com, or you can get any 2mm pvc tubing you can find online.  The medical grade stuff only comes in bulk, but it is more flexible and tougher than the bracelet material.  Initially I cut the tubing off of a butterfly needle setup to test out the idea.  Since the medical tubing is more difficult to come by, and I'm too cheap to buy the "Official" stuff off the website, I looked for an alternative online.  I was able to get 5-6' of some lower grade plastic pvc tubing online for $6 from some person on ETSY that sells the stuff for bracelets and necklaces.  I cut up a bunch of 4mm sections and place them in a little plastic container with my balloons.  The medical grade stuff is better if you can find it, but the tubing I purchased from ETSY does the job just fine. 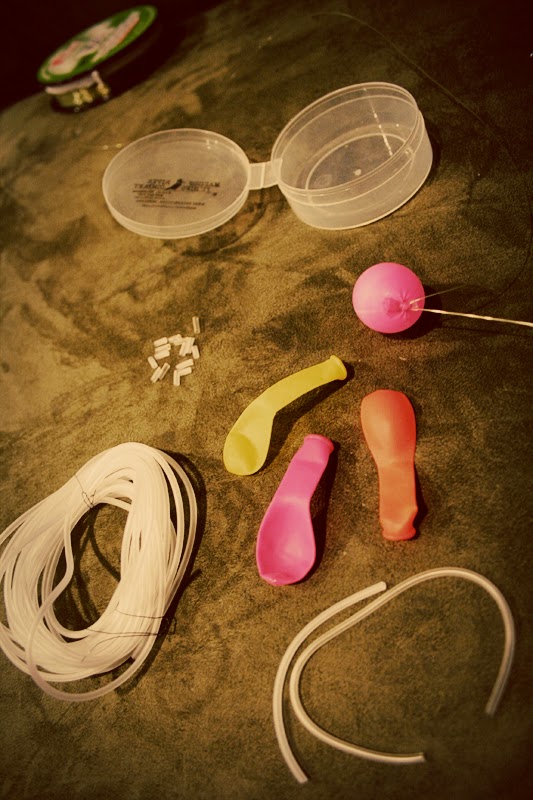 As for the balloons, they are easy to find online, and one bag will last a long time.  I prefer the orange and yellow balloons for most occasions. I recently purchased some more balloons from a seller on EBAY, and will edit this once I know how well they work.  I purchased some "clear" balloons from that same seller that I am hoping will be perfect for wary trout on small spring creeks.  We'll see how it works out.  Once I have the results from those outings I'll edit the info into this post.

POST EDIT: I have come to the conclusion that water balloons are the way to go.  The thinner latex works far better than the regular balloons.


A Couple Other Things To Consider

One other thing I noticed while fishing this setup is that if the balloon cinches down on your line at a weird angle, it will cause your line to spin/coil.  So if you notice your line getting twisted, just change the orientation of your balloon and re-cinch.  Also, when moving the setup back and forth on your leader, do so at a moderate speed, otherwise the friction on your leader will cut into your plastic tubing a bit.

Take it for what it's worth.  I'm no scientist, and these are not minutely controlled experiments.  Still the findings were interesting.  I took the same size of balloon/thingamabobber and compared them for buoyancy.  The balloon handled more weight than the thingamabobber.  Not a ton, but it still floated higher.  That showed me that one really can get away with a smaller indicator size with the balloon, when compared to the thingamabobber.  I used the same amount of weight on both and kept adding more in small amounts.  These pictures are what I noticed. 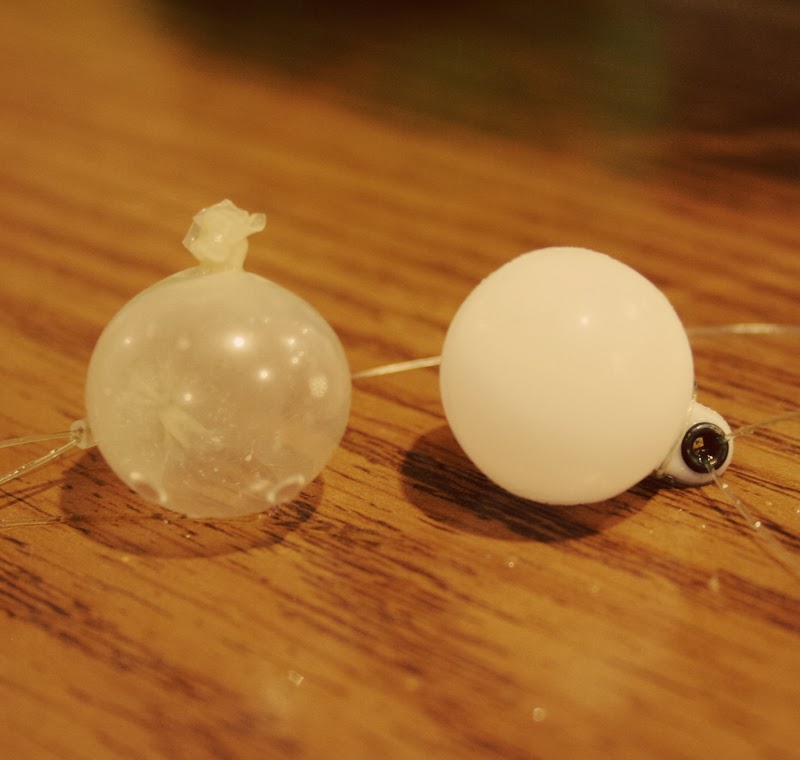 I am loving the setup.  It makes fishing a balloon extremely easy, just make sure to clean up the bottom part that gets nipped off, or any other balloon fragments if the balloon pops on you.  I still carry Thingamabobbers for backup, and will use them when I'm in a real hurry, but most of the time I'm clowning around with the balloons.  If you still prefer Thingamabobbers, you might consider this newer trick for avoiding kinked line.  It also makes it easier to move your Thingamabobber.

These are a few of the fish that were picked up while using the balloon setup, with many more to come. 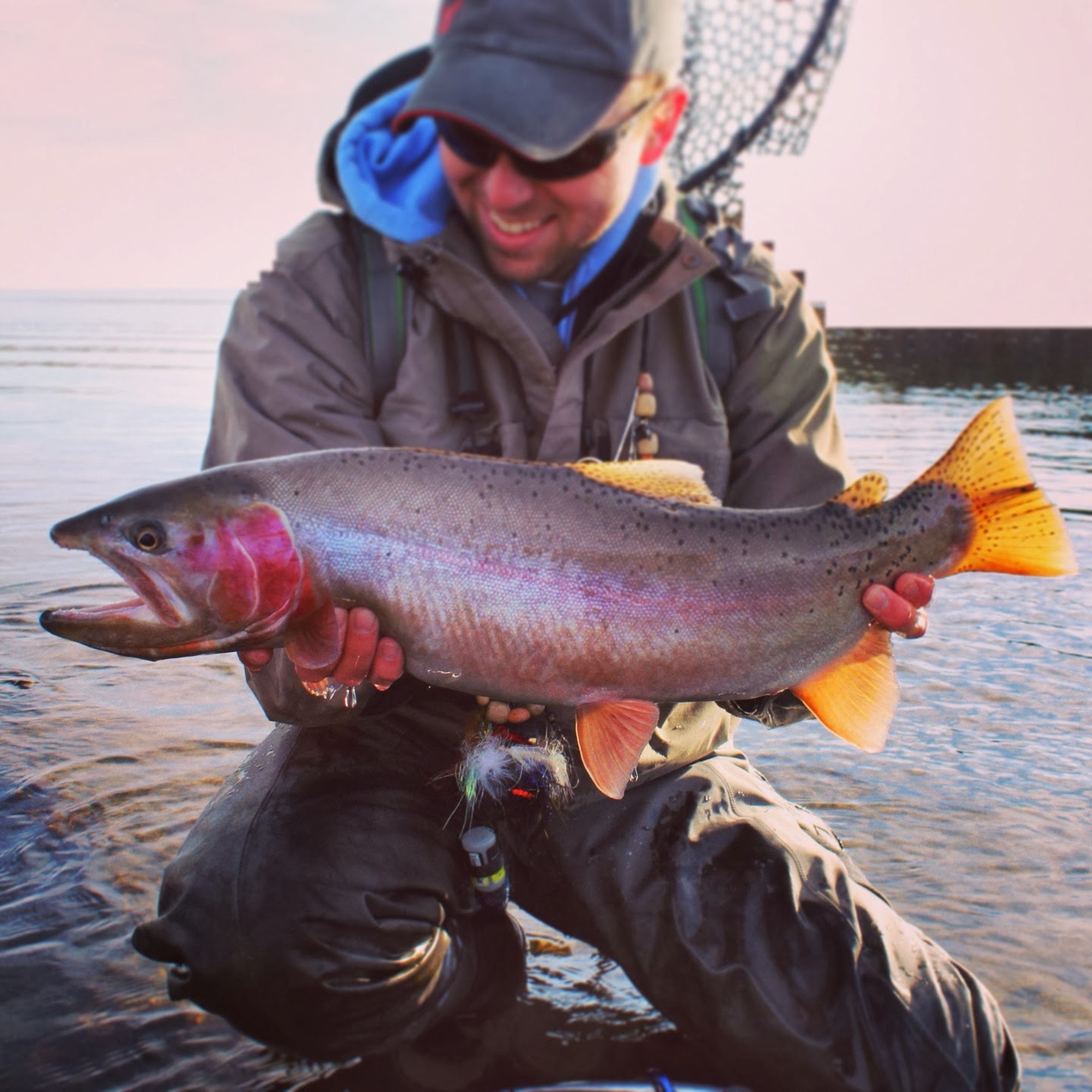 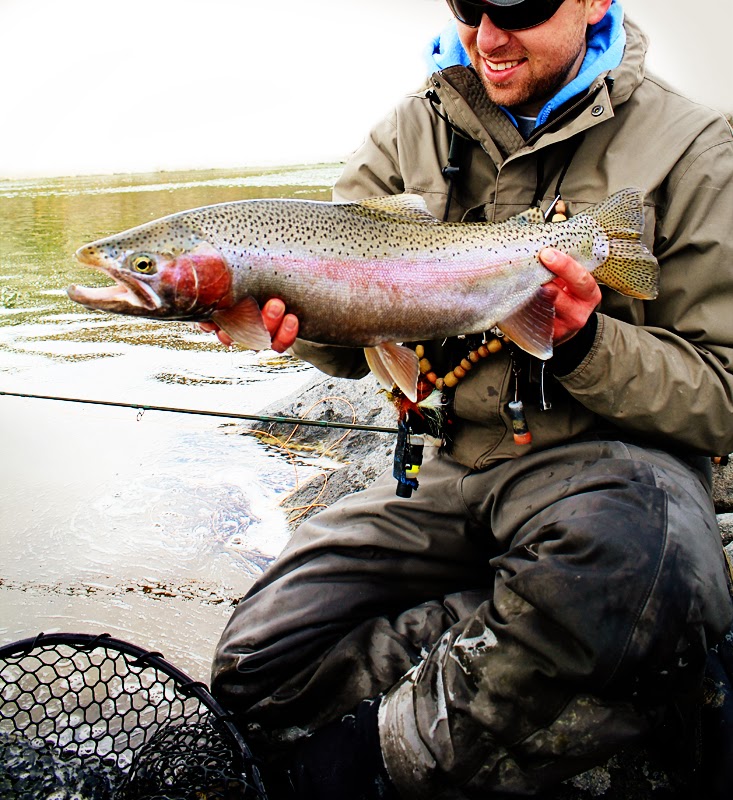 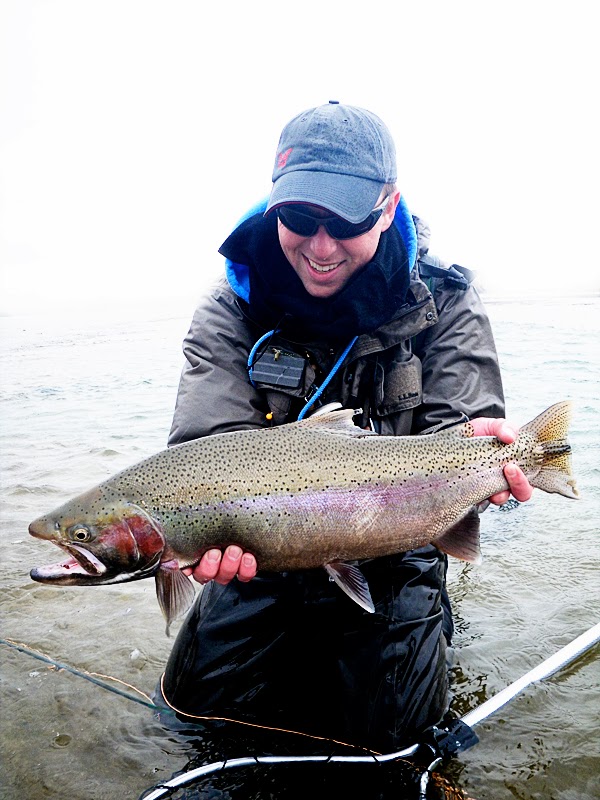 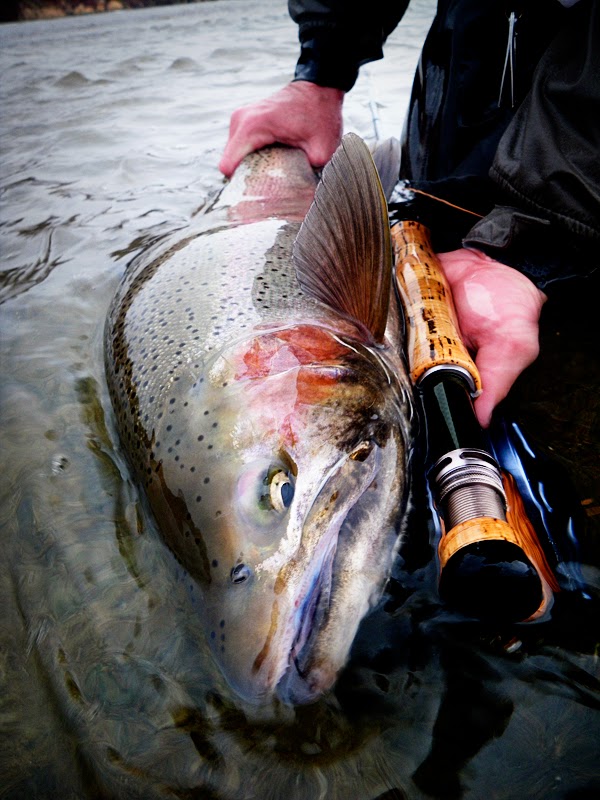