Took a detour on my way home from school today. It was about 3:45 p.m. when I arrived at the river. Five minutes later I was wadered up and had my rod in hand. I decided not to tie up just yet because I wanted to scope things out first. I haven't fished this stretch of river in roughly 10 years. It's amazing how much a riverbed changes over that time. The main channel flows on the opposite side now, and what once were excellent holes to fish are now large dry gravel bars. Part of me missed the old "go-to" places. Even so, a greater part of me was excited to rediscover the area. I already had a good idea of what the water looked like down stream, so I decided to head up. After eying the water a bit I decided to start out with a black streamer prototype I'm working on. No love. Fished it for a bit, but the clear sunny day today resulted in wary fish. I swapped my big rig for some midges and hooked up on a few little guys. Each in their turn decided to come loose mid-fight. Curse small hooks. 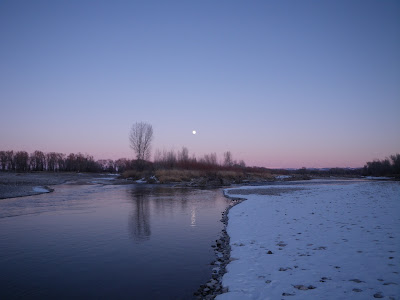 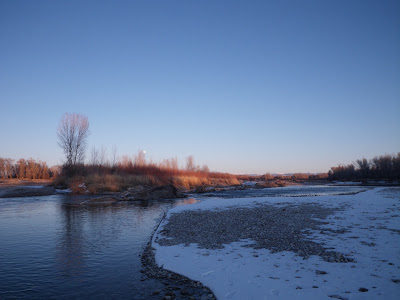 After meandering about, enjoying the beautiful day and scenery, the sun began to sink behind the trees. I thought to try the streamers once again since dusk began to show her face. Man it gets cold quick. Second cast to the very first place I had started fishing and BAM! A decent 13" brown. In my excitement I forgot to get a picture. Subsequent casts yielded some fast and furious fishing. Nothing large, but I did gather my wits enough to snap a coupe pictures. It becomes difficult to get a good shot when the light wanes. 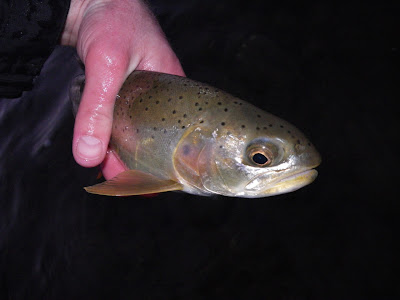 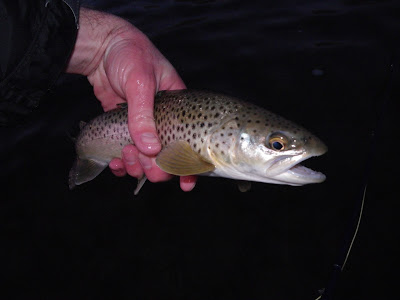 Tomorrow Jared and I are considering an afternoon venture to see if there are any carp to be had in the chilly month of February. It's a bit of a leap, but who knows, maybe it will turn into one of those amazing stories we'll repeat for years to come. Then again, we may just end up fishing for some little troutskies on the Portneuf. Either way we will be fishing, and that's worth the cold any day.
Posted by Chris at 10:25 PM 1 comment: