Movement is a principle of life. Stagnation yields disease and decay. Movement means growth, organization, improvement, productivity, and cleansing. As it is in life, so also in fly fishing. 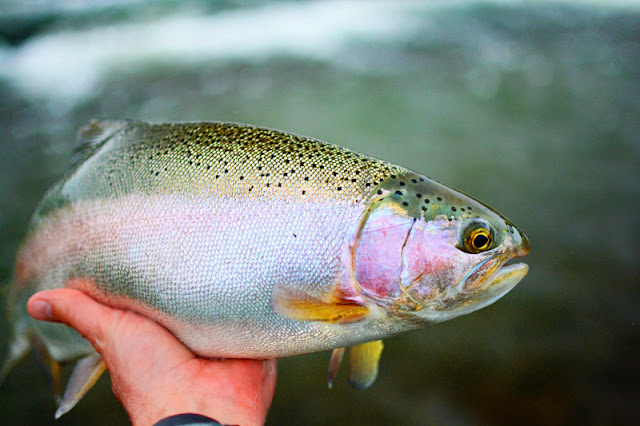 "How long can rolling waters remain impure? What power shall stay the heavens? As well might man stretch forth his puny arm to stop the Missouri river in its decreed course, or to turn it up stream, as to hinder the Almighty..."
D&C 121:33

Streamers: When fishing a streamer it never hurts to consider what the fish might be taking it as.  Does it look like a baitfish? Perhaps a large leech? These questions are good to consider because they may change how you move the fly, if you are moving it at all.  Leeches wiggle, shrink, expand, and pulse through the water column.  As a fly, this would result in smaller movements, pauses between strips, where the fly covers less distance, but may still be repeatedly abrupt or jerky. A baitfish is more likely to dart or have a continuous swimming movement. One of the big differences is from the amount of water they cover. An injured baitfish may fall to the river bottom only to dart back up into the water column.  One of my favorite retrieves when fishing a baitfish streamer is a short fast strip, followed by a longer slower strip, and then a moments pause.  This approach has coaxed many otherwise unwilling fish to bite, making them think that their potential meal would be easy-pickings. Trying different stripping techniques is a quick and easy way to switch up our approach and worth trying before we switch to another fly or move to another run.

Nymphs: When fishing a nymph we often think that a smooth, unaffected drift is best. I think this idea results from an issue dealing with depth and bite detection. Whenever we mend our line in a way that our indicator moves, it lifts our flies out of the sweet spot, requiring more time on the drift for the flies to sink back into the zone.  Good mending usually helps us avoid pulling our flies too much out of the zone, but we often miss out on an aspect that could increase our catching; the movement. To add movement to an indicator/nymph rig the answer is found in adding more weight either to the fly or to the line.  This allows us to twitch the indicator intermittently, causing our flies to dance, all the while still allowing our flies to stay deep in the zone. Adding movement can be especially beneficial when fishing a hatch where bugs are emerging or fishing nymphs that resemble a leech, baitfish, or crayfish. If you aren't using an indicator, you may already know how deadly a slow stripped tandem nymph rig can be. Swinging soft hackles is another effective approach.  With a single handed rod and floating line, an upstream cast, with a generous amount of line/slack, allows the flies to sink down and run lower in the water column. Then when your line reaches the end of the drift and comes tight, the flies that sank on the drift, rise in a "hatching" motion. The takes are usually aggressive.

Dries: Nothing looks more delicious to a hungry surface-feeding trout than a struggling terrestrial. Now, this does not mean skating a mayfly, though that technique slays with caddis. In most cases though, the drag-free drift is the way to go with dries. But just because you are keeping it drag-free doesn't mean you can't make that chubby shimmy. Ants, hoppers, mayflies, spiders, wasps, beetles, bees, and many other topwater tasties struggle once they find themselves stuck in a watery mire. Little twitches can conjure up the unwilling trout, much like the right movement with a streamer will do. Indeed, two anglers can fish the same water with the same fly, but one can outcatch other other 3:1, and this is usually their secret to success.  Adding movement to dries seems to be easiest with larger, more bouyant patterns like hoppers, chubbies, salmonflies, and caddis, but does not need to be restricted to them.  The trick is to make the fly have movement, but not move the fly a great distance in the water. Much easier said than done, but a worthy technique to master.

Fly Construction: Not all materials are created equal. This is a hard concept for many to accept. I hear ice dub has even made an appeal to the supreme court because hare's ear dub is claiming that ice dub is not natural. Rabbit strips say it won't go anywhere, and most saddle hackles don't want to get involved. I say, why can't they all accept their differences and get along. Together they could make a pretty sweet fly. All kidding aside, knowing what a given material does in the water can be helpful.  Some materials have inherent movement and require less work on the anglers part to make the fly look alive. Other materials require the angler to compensate. Some are better for a swinging fly, while others do better stationary or stripped in. Rabbit hair flairs out and pulsates with minimal added movement. Buck tail is more ridged and maintains a fuller body. Marabou feathers slick down and keep a narrow profile when in the water. Ice dub, as a synthetic, loops and has a brushy velcro effect that can catch on a trouts teeth. These are good things to be aware of because you know what your fly can do and what you need to do to help it look alive. Mixing different kinds of materials to construct a fly can also add or take away movement. A good example of this is Kelly Galloup's Sex Dungeon. The large deer hair head pushes water and, much like air pressure and airplane wings, creates a negative pressure behind the head. This results in a stationary head and an erratic swimming tail. Even if you do not tie your own flies, it doesn't hurt to understand something about how they are made. If nothing else, play with them in the water close enough to you that you can see how they act and react to your movements with the rod.

Two Flies: One thing I often do, which has helped improve my catching considerably, is to fish two flies at the same time. This is one technique that a lot of anglers avoid because of the extra hassles involved.  The reason I mention this in an article aimed at movement is that whenever a second fly is added, the attached line and dragging fly affect the lead fly. This can hinder hookups and movement on the first fly but can also make it look much more desirable. I'll often tie on a white trailer because it gets the fishes attention.  I honestly think that they see the white more easily, and then register that it is chasing another thing. In the spur of the moment this creates a momentary thought of scarcity for any fish seeing the chase. "If that little fish is focused on what is chasing it, it won't see me coming to chomp it from the side!" is what a fish might say. On a side note, I have also noticed that fishing a heavy lead fly and a weightless trailing fly lets me fish deeper but helps me avoid getting snags because the trailing fly helps pull the lead fly up away from the bottom.

The Angler: Sometimes we linger when we should move to fresh water, while at other times we walk right through what has the potential to be a productive lie. For this I have no great advice to give because it has mostly to do with preference and personal experience. I will say this though, when given the choice I usually choose to move.  If I move around and have not found success with what I expected to work, I then change up my tactics and cover the water again. Just don't give up too quick or you'll rob yourself of some good learning opportunities that will likely result in some stellar fishing.