Cabin Fever - a hit and a miss 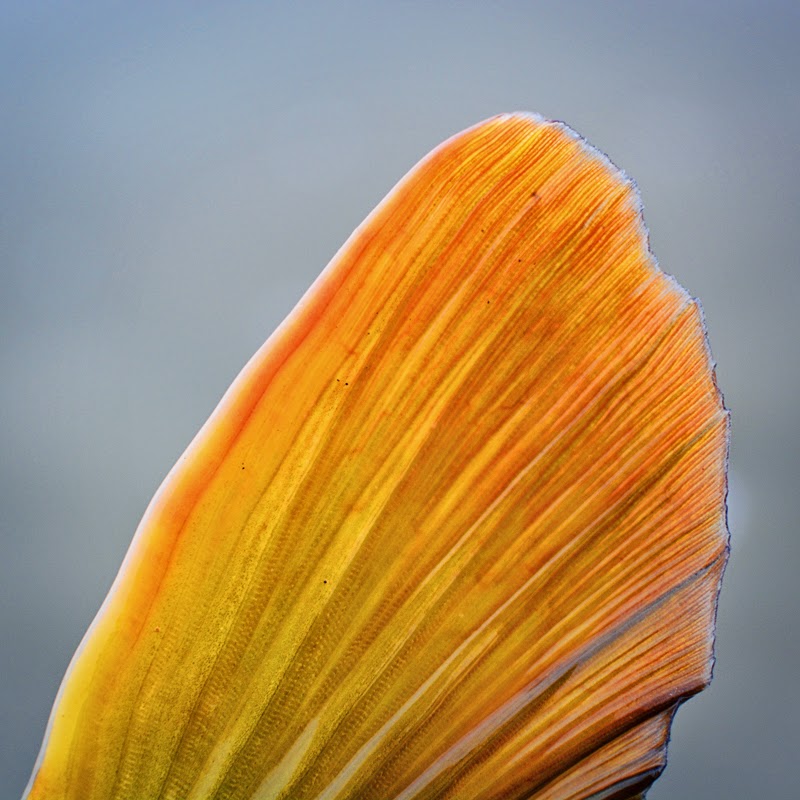 It's inevitable. Inescapable. And it can hit without warning. When the air outside begins to warm again and the hidden world of growing things reemerges from under a wintry blanket, I start to get fidgety. My focus blurs and grandiose ideas of epic fishing trips flood my mind.  This year it came early, and took me a couple weeks to realize it, but, like my two year old realizing the reason he needs a new diaper, it occurred to me that I have a bad case of cabin fever. And like the my kiddo's diaper, it's a messy business.  I get crazy and start foaming at the proverbial fishing mouth. All I want is to eat, sleep, and be fishing.  Ideas flow, and tentative mental plans are made, many of which I know will not happen due to time, money, and home and garden obligations. But I can still dream. That is where much of the magic happens really. Quite often the anticipation of a thing is more enjoyable than the actual event, not always, but often. And, as a husband, father, son, employee, and neighbor, I will try and keep things balanced, but sometimes it's hard to fight the daydreaming haze of cabin fever.


Considering my current state, it is only natural to assume that there is some fishing going on. Not really any more than I normally am fortunate enough to do, but the cabin fever is made evident by the last two trips.

Two weeks ago the forecast was slated to warm about 20 degrees, and stay that way for a few days.  This warming trend has often produced good results in a few areas where the golden lips are known to hang out.  I invited a couple friends, but my preference of hitting the water midweek to avoid crowds does not coincide easily with other people's schedules. So it was to be a solitary mission. Fishing alone used to really bother me, however, the older I get the more I find I enjoy taking things at my own pace and the fresh air and open space give me a good place to think. Besides, the older we get, the slower our bodies go, and the more we realize how important it is to take time to think. I'm getting off topic though.

As I pulled up to the muddy-banked stretch of water, I noticed the sun was going to be temperamental and only give me a wink every now and then between the overcasting clouds. It even looked like rain off in the distant hills might pay me a visit later in the day.

I hopped out of the car and, not even getting ready, decided to take a walk along the water to spy things out and come up with a plan of action. Even though a few-day warming trend has often shown good results in the spring for carping on the fly, it does not always guarantee that the carp got the memo. With that in mind I wanted to see if there were any carp around.  I walked for a ways, beginning to think that my pilgrimage had been in vain. The water was clear enough to see to the bottom in most areas and the sun was playing nice, but there was not a carp in sight, and none rolling in the distance. Being the doggedly stubborn fisherman that I am, I kept walking. Then it happened. I came up on the last stretch of water that would provide any hope, and to my surprise there was not a couple fish here and there, but what looked more like a thousand all schooled together in two big clumps. There were smaller groups of three and four swimming around the edges, working the banks for any potential morsel. I was in shock and it took every ounce of self control I possessed not to run down the bank and dive into the mix, trying to wrestle a couple to the bank. Though the sheer manliness of that act would probably increase my chest hair and muscle size three times, I thought it better to take the long walk back to the car, get my gear together and approach the situation in a more traditional manner.

After having difficulty focusing enough to wader up, put my rod together, and tie on a fly I began the long walk back. Knowing my personal tendency to not take the necessary time to sneak up on fish without spooking them, with restraint I slowly crept down the bank and got into position. I decided that it was better to work the very edge, a little away from the school, so as not to spook the whole group.  This approach proved very effective. I saw my first target slowing working along the bank about ten feet away, and coming my direction. I lightly cast my crawdad pattern a couple feet passed the cruising missile, then steadily pulled the fly a few inches in front of it's head and let it sink once more.  The carp greedily burst forward and went head down.  I tried waiting that painful extra moment before the set and the hesitancy paid off. Strip-set, rod-lift, and it was game on.  That initial burst that carp make is one of the most fun things about hooking into a carp.  I spent the next few hours fighting carp, with only a couple minutes reprieve in between hookups. 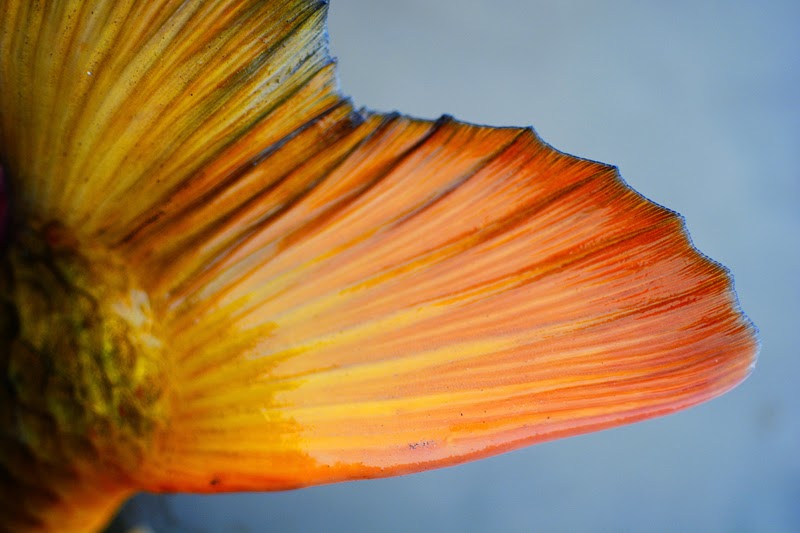 There were so many fish cycling through that I became more selective. I would choose one because its bright shiny scales made it stick out like a sore thumb, then I would aim for a particularly large looking specimen, and then again to what looked like a dark unscaled mirror. 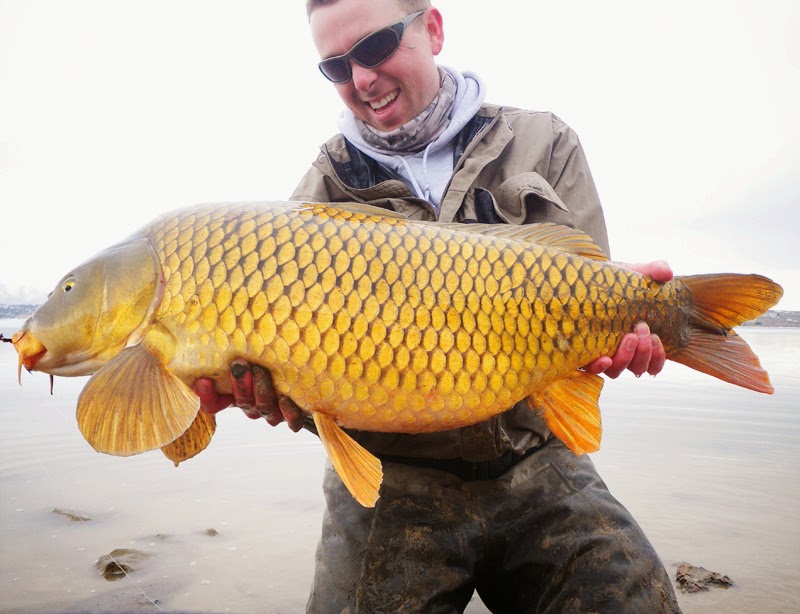 It was a fun game and I began laughing out loud with enjoyment. Carp are strong, and wrestling one into position for a picture when you are alone and trying not to get your DSLR wet/muddy is tricky. I got covered in mud, but loved every bit of it. Once satisfied and nearing time to leave I decided to venture over to the heart of the school for fun. I managed to stick a couple fish before the horde moved to deeper water. After that smaller groups still kept cycling along the bank, but with more time in between groups. 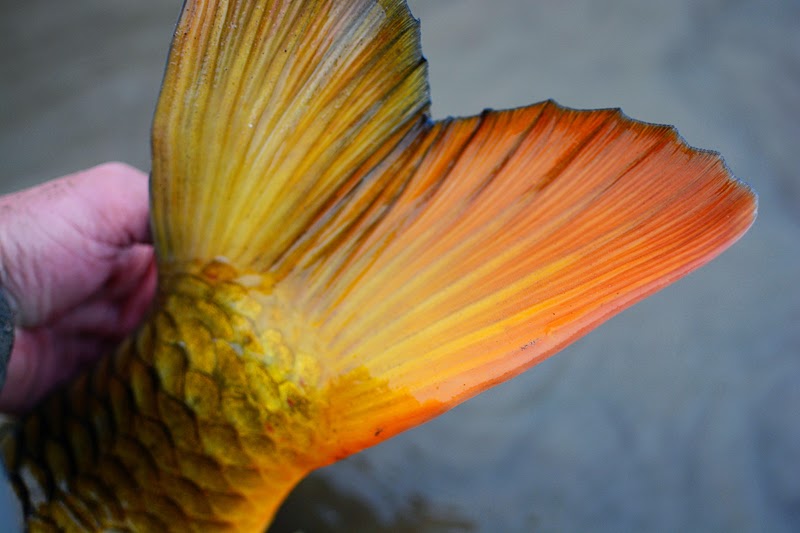 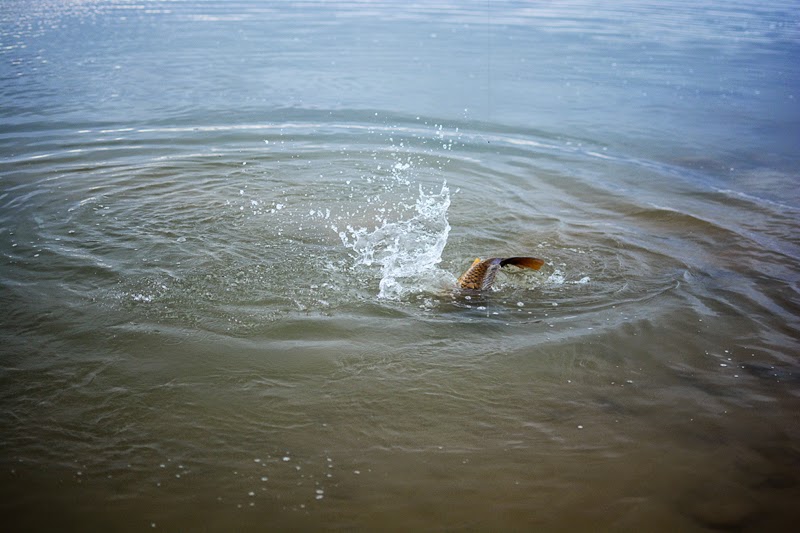 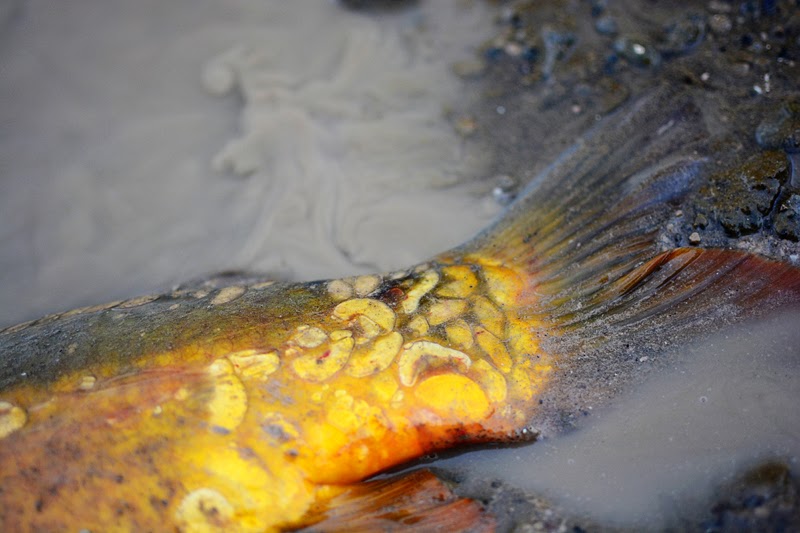 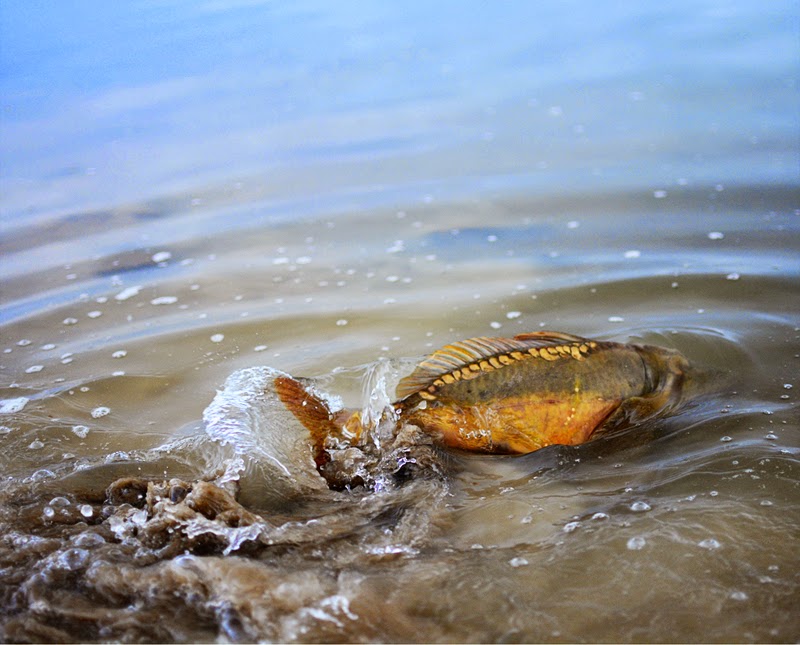 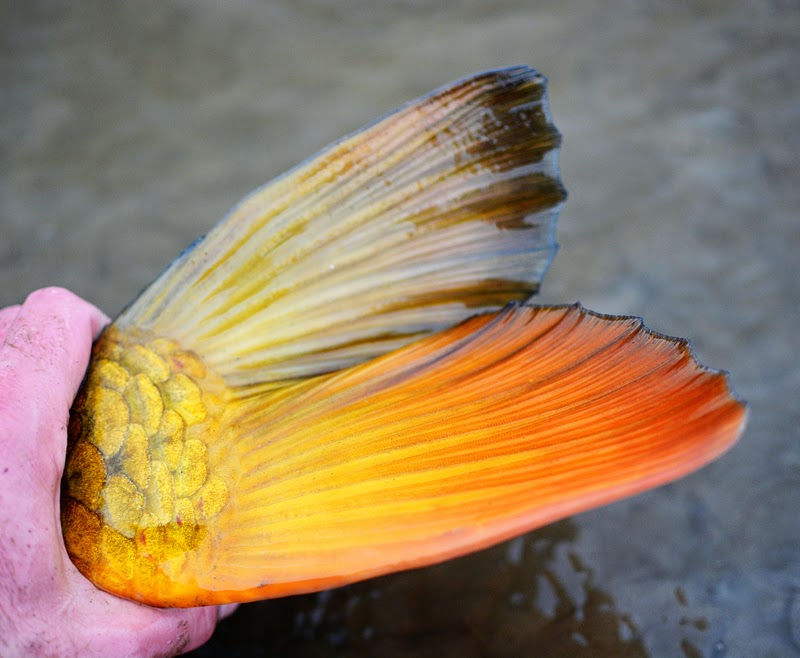 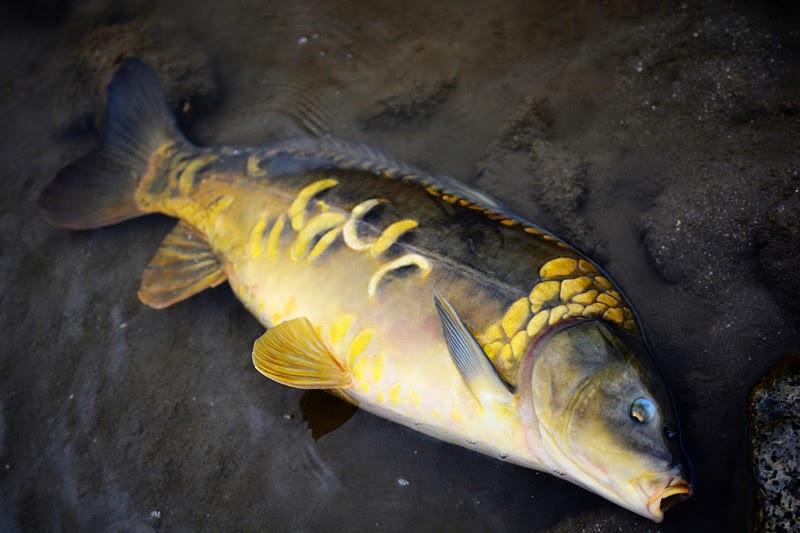 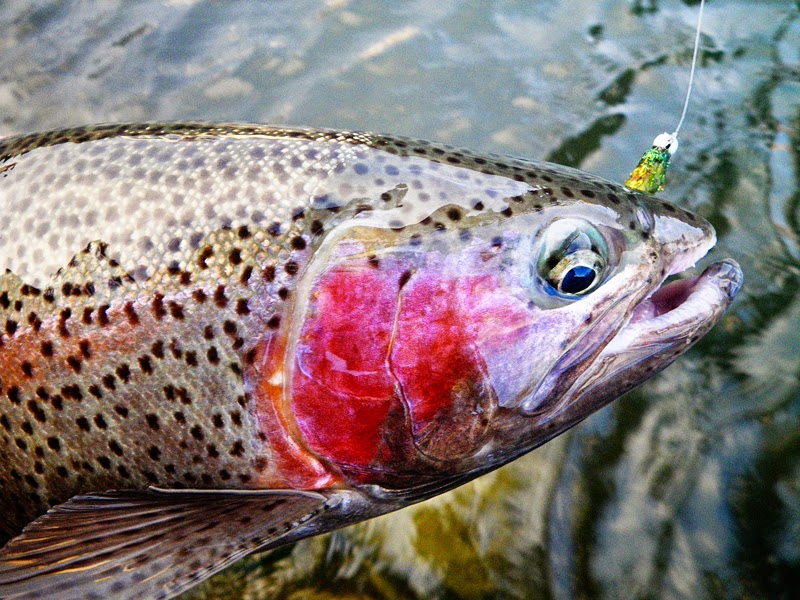 Satisfied with an excellent outing I tried for a couple trout and then headed home.  Cabin fever attempt numero uno = WIN (Epic Win in fact).


The second and more recent attempt to assuage my rising desire to fish in nonwintry ways occurred last night. I tied up a few Artimouse patterns and hit the road about 9pm. The temperatures outside had me hopeful.  While I drove I noticed a couple mice scurrying across the road and it gave me hope.  Once to the water I got ready and began creeping around the waters edge, listening for any rolling fish. Owls, beavers, and coyotes were heard quite clearly, and a few smaller fish jumped, but none of the brutes of the night were on the prowl for big meat. I think it's still just a bit early and the mouse hatch is not in full swing. Cabin fever attempt numero dos = FAIL. Still, it was wonderful to be out in the dark of night again, despite the scary noises and splashes in the water from unknown creatures moving to and fro. 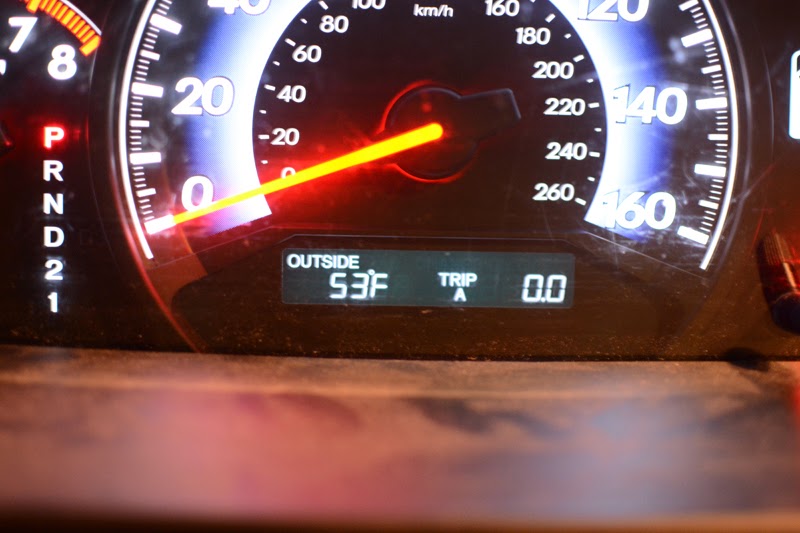 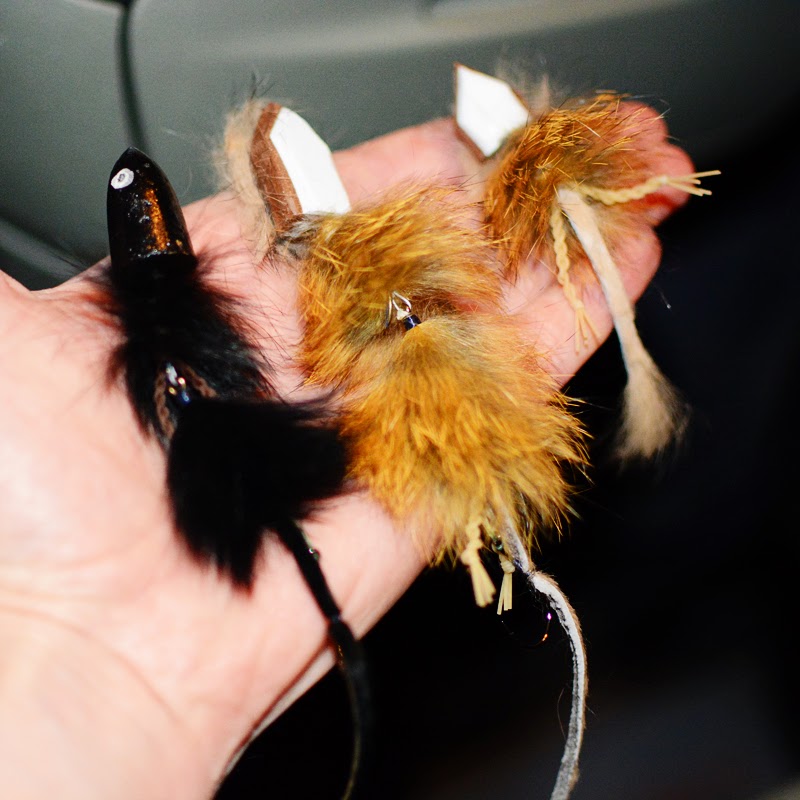 You win some and you lose some, and every little bit helps keep the cabin fever under wraps. Cheers to all my fellow anglers, and here's to a great coming year on the water.  Whether we meet in cyber space, or in person on the river, I look forward to some great stories, even better fishing, and new friends. I love you guys... or that could be the cabin fever talking.