Why is there never enough time when the fishing is excellent?  I have to keep reminding myself that there will always be good fishing somewhere, and big fish to catch even if I can't get after them right at the moment.  I really can't complain considering I was fortunate enough to make it out last week for a bit more fall fun.

Brent, Shane, and I had been trying to make plans to chase some beefy bows, but kept struggling to synchronize our schedules.  The hope was to tackle some spunky spitfire bows with streamers.  We finally managed to get a day set in stone.

Once we were on the water the streamer plan quickly changed.  Shane had been a few days before (Oh the life of a bachelor.  He gives me a hard time about it too.  Every now and then I have to remind him of the perks of being married.  That usually shuts him up pretty quick... ha ha), and found that streamers weren't necessarily the best approach.  We picked up some healthy bows on our black fish jewelry, but the real ticket was found in good old fashioned nymphing. 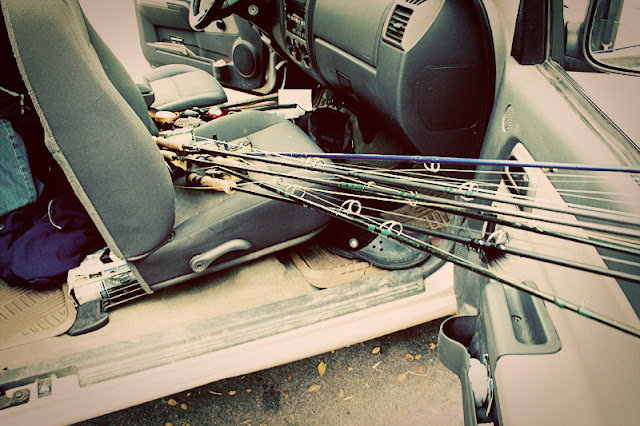 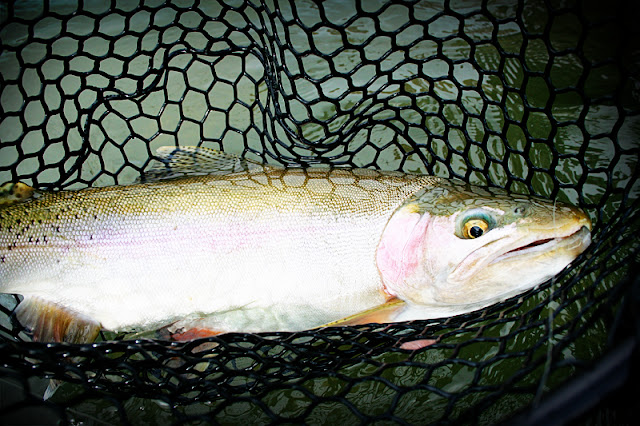 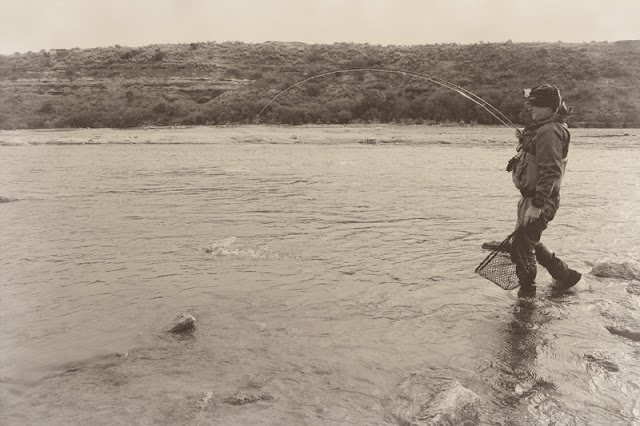 As much as I love picking up fish on streamers, it feels fantastic to have a hard fighting fish on the other end of your 5 weight! 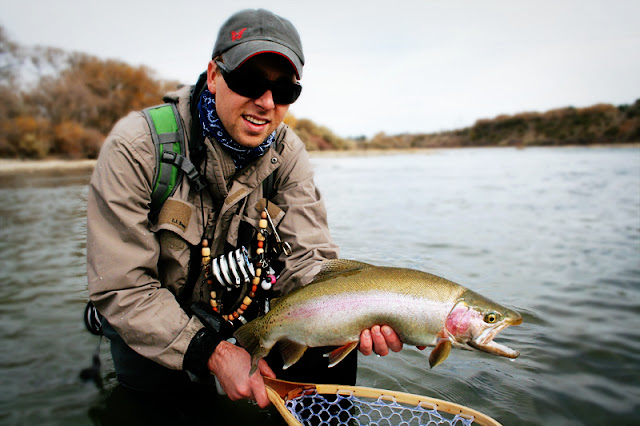 Of all the guys I have fished with, I have to say that Shane has some of the best facial expressions! 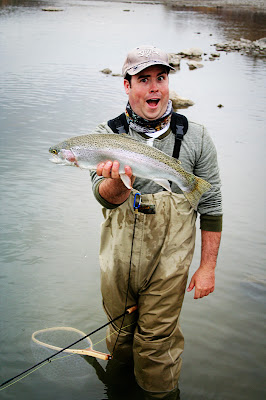 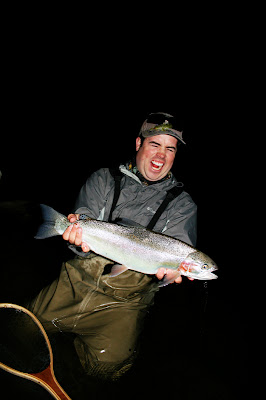 One drawback to fighting big fish with little nymphs is the stress of losing fish.  Confidence levels are much higher when bringing a fish in on a size 2 hook, as compared to a 14, 16, or 18.  In the first run we were fishing I set into a huge fish and my mind immediately when into freak-out mode.  The stress of landing the monster was tangible and what made things worse, I had given my net to Shane who was on the other side of the river!  I kept the fish in the water as Shane began making his way over, but while I was holding the fish in the slack water she popped off.  Those losses are always a bit devastating, but the losses make the times we land them that much better. 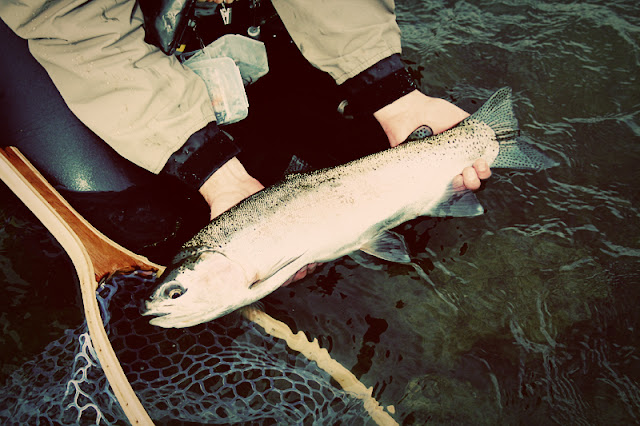 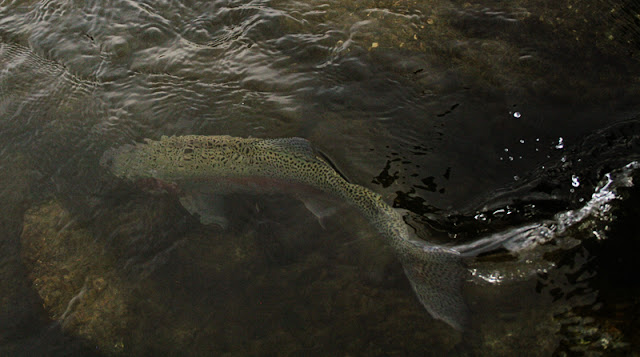 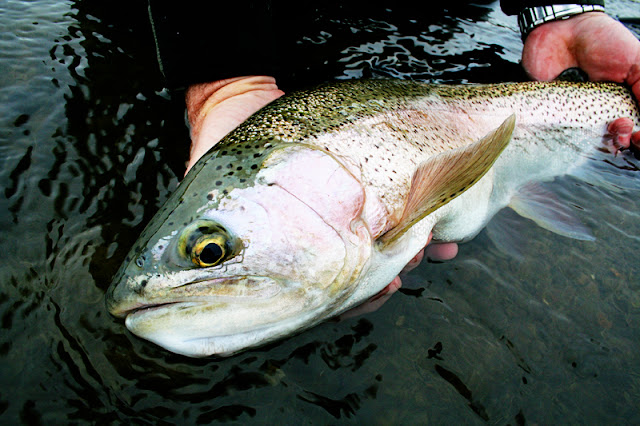 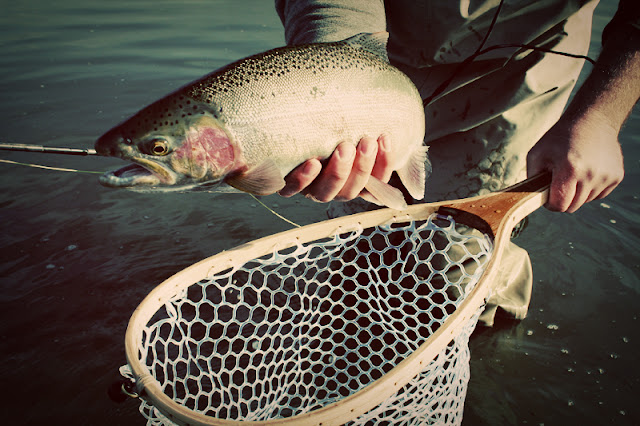 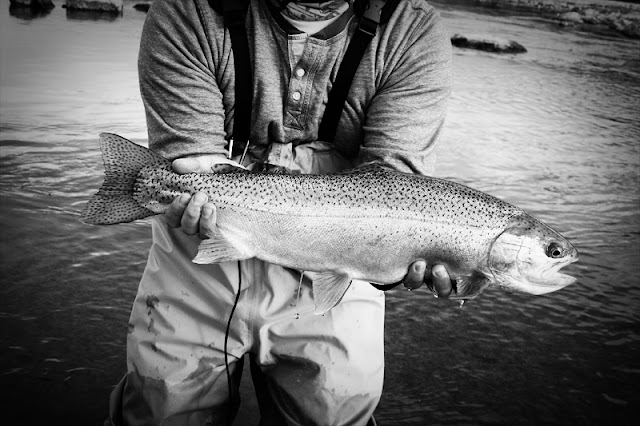 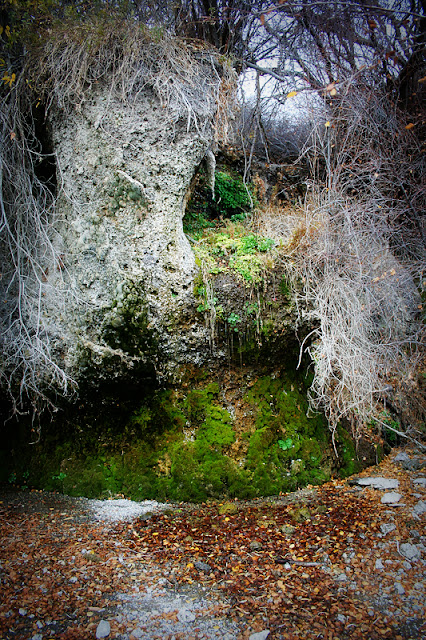 As dark was setting in I decided to switch back to streamers thinking they would be more productive.  I slowly worked down the run in the failing light.  The sunset was beautiful.  Bump, set, miss.  As the sky grew darker the fish began to key in more on the big stuff.  I cast across the river, let it swing, and then began a steady slow strip.  A few long strips in I felt the familiar throb on the other end and strip-set hard.  The fish responded with slow, heavy head shakes.  I thought I had foul hooked a carp!  After a fantastic bull-dog fight the beautiful brown came to hand.  Brent came to my aid with his net and relieved the stress of landing the fish with one good scoop.   A beautiful brown with a beautiful sunset.  I was satisfied.  Shane and I picked up a few more in the dark, but then we all decided to call it a day, and what a day it was. 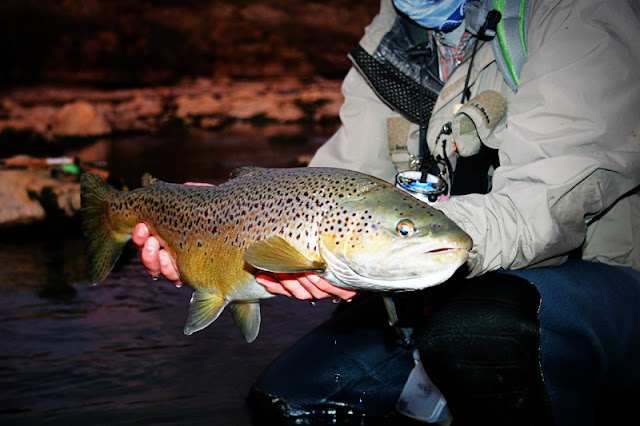 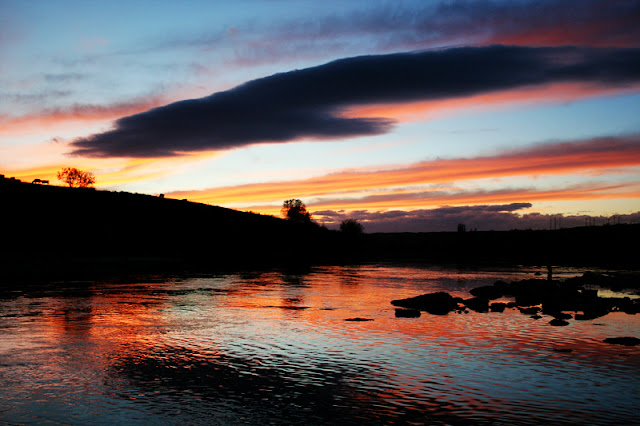 It was a pleasure fishing with Brent and Shane, as always.  They are headed back out again tomorrow.  Sure wish I could go, blasted biology test!