What is a fisherman but a philosopher and a theologian chasing underwater works of art.  One thing about the places we fish is that they give room for our thoughts to breath.  Good company on the water only helps them solidify.

"It is the chance to wash one's soul with pure air, with the rush of the brook, or with the shimmer of the sun on blue water. It brings meekness and inspiration from the decency of nature, charity toward tackle makers, patience toward fish, a mockery of profits and egos, a quieting of hate, a rejoicing that you do not have to decide a darned thing until next week. And it is discipline in the equality of men-for all men are equal before fish. And the contemplation of the water, the forest, and mountains soothes our troubles, shames our wickedness, and inspires us to esteem our fellowmen-especially other fishermen."
Herbert Hoover Sept, 1951

Faith in the catching
Children generally have an immense optimism that could put even the most optimistic adult to shame.  I find myself telling William that something is simply not possible, and he will reply with some outrageous or unreal method and is convinced it can still be done.  It often involves dragons, money appearing out of thin air, or his self proclaimed ninja-fighting skills.  Bita and I often chuckle over what we call his "eternal optimism."  Recently Will and I have been tying flies together.  I let him use whatever scraps are produced when I tie, and snip off other small parts of materials he is set on using.  No matter how much I encourage him to tie a boring old wooly bugger, he would rather exercise his own creativity.  All the while he explains just how amazingly effective his new pattern will be.  And who am I to say it won't actually work.  What would the world be like today if it were filled with that kind of optimism and faith?

When do we lose it?  When does the practical monster get us?  It must be a gradual thing because most people have to work at remembering they had it at all.  The fond memories of my childhood are usually connected with fishing, and so it's only natural that I look to them when considering this kind of thing.  As a child I was convinced that if I tried hard enough I could catch a fish in the gutter or the kiddie pool in the backyard.  I would have dreams of catching fishing in the front lawn, as if it were only water pretending to be grass.  As time passed and I started spending more time on rivers and streams, I was convinced there was a fish behind every boulder and under every riffle.  I honestly believed it, and it paid off more often than not.

A spark of that faith still exists in every angler. For some it's more of a flame.  Why else would we do the things we do.  Enjoying the beauties of nature is one of the best parts of getting out on the water, but any fisherman who says that is the sole reason for fishing is kidding themselves.  We fish to catch, and catching brings a satisfaction and thrill.  All it takes is one good "catching" experience and a person is hooked.  One great trip can fuel an anglers faith in their catching ability.  This is true for angling in general, but also applies to different techniques within the sport.  Most guys avoid throwing streamers until they happen to try it and have a good experience.  The good experiences feed our faith and carry us through the bad trips.  Successful angling starts with faith, the more childlike the better.

No one likes to fish with the "Doubting Thomas Angler."  He's the guy that doesn't expect to catch a good fish, or any fish at all.  Part of the joy of fishing with others is celebrating their catches like they were our own.  Don't be a DTA.

Faith can be a slippery topic in life and it's no different with fishing.  Sometimes faith is hard to hold onto when, as an adult, you understand what is really going on in the world.  There's so much violence, so much hate, and an endless supply of selfishness.  I guess what it all comes back to is how important it is to remember your own childlike faith, and do your best to hold on to that immense optimism.  There are infact (I believe) more good people than bad.  Most people only want happiness in life.  Yes, faith can be as slippery as a fish, but despite the messiness of life things will work out.  Fish will be caught.  Good fish are everywhere.  There may not be time to fish now, but there will be later.  Believe it and good things will happen.

Focus on the catching
We have all had those days when we probably should be doing something else, rather than hitting the water, but we find ourselves standing in the river with a rod in hand.  Maybe we left the house with the significant other looking like they just bit into a particularly sour lemon.  Maybe your to-do list has gotten so full it should be called a to-do novel.  Or maybe you stayed up far later than you should have and really should be sleeping or studying.  Whatever it is, we all know that feeling where we should be doing anything but fishing.  Hopefully we keep these trips to a minimum, but they do happen.  The few I have been on have taught me a lesson in focus.

If you aren't focused on the catching, very little happens.  Sight and touch/feel are probably the two most vital senses an angler possesses.  If you can't see or feel what is happening on the other end of the line, you are S.O.L. (so outta luck).  This is probably a "duh" point but the more attention and focus we can give when on the water the better our catch rates will be.  We'll miss less fish, learn the run better, and understand how to fish it.  A distracted day is a day spent wandering to and fro in the water, casting much and catching little.  Focus on what really matters, and then you can focus on the fun things and all aspects of your life will be blessed.

A Few Good Fish
This spring has been hit and miss.  March was filled with great fishing.  April has been pretty retarded fishing-wise, not to mention all the other junk that is going on in the news.  We don't pester fish once they have started cutting redds, so that limits a lot of the potential fishing in April.  Add in extremely high winds, runoff, and some nasty dips in temperature, and this month makes for tricky fishing.  With the ups and downs, we have managed a few decent fish here and there.  Here are a couple pictures of fish from both months. 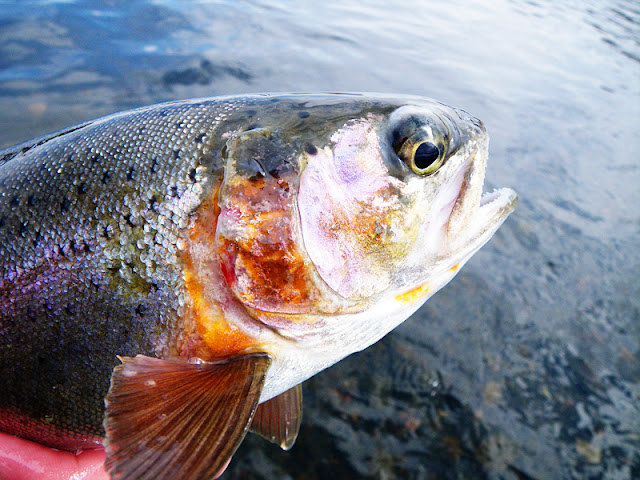 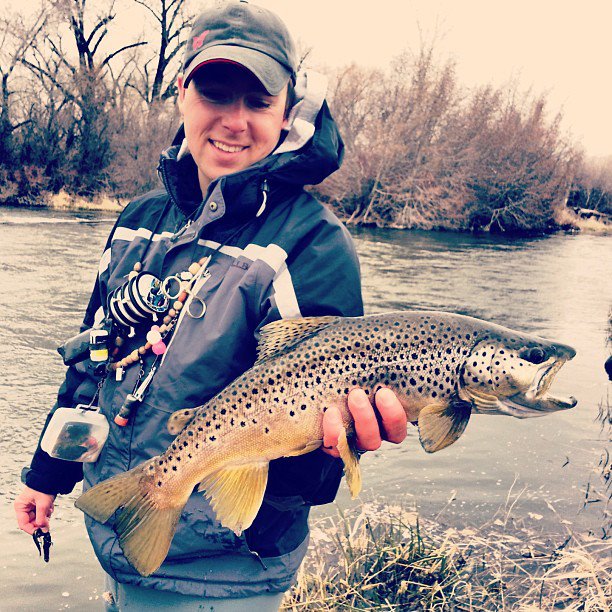 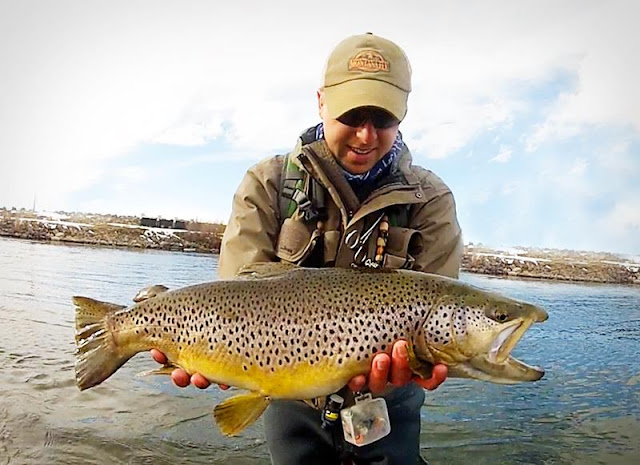 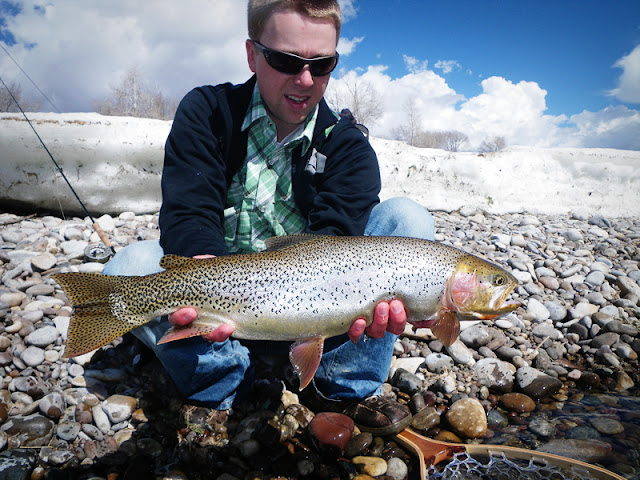 Shane and I just got home last night from a two day steelheading trip.  It was later than I would normally go, but school took priority and pushed things back a bit.  It was a successful trip, with some good fish caught.  Report on that to come soon.

In the meantime, have faith.  Focus on the things that last and matter most.  You might find yourself catching a few things that really make you happy in life.
Posted by Chris at 1:01 PM