"Whenever, therefore, people are deceived and form opinions wide of the truth, it is clear that the error has slid into their minds through the medium of certain resemblances to that truth."
-Socrates

Both fish and people alike are prone to chase after imitations.  I wish I could say fish do so more than people, but that is probably not true.  I wonder what fish would tell each other concerning such things if they could speak.  Just imagine it.  One fish says to his friend, "you mean you actually thought that hairy thing was a minnow!?  What a doofus."  Putting aside the theological discussion that could be had concerning people, I have to admit that I am grateful fish can be duped.  What is even more gratifying is knowing that the device for deception can be a homegrown, do-it-yourself affair.  "Matching the hatch" is the common phrase, but "matching the meat" could find its place as well.

There is something to tricking a fish into eating fur, feathers, thread, and steel.  It appeals to the sleeping caveman hunter in all of us.  Sitting at the vise, grabbing various materials, building a new fly as it is tied can be quite fun.  Then fishing it, feeling how it casts, and observing its movements in the water.  The biggest test of all... does it catch fish.  After fishing the pattern and getting a feel for it, you take the ideas back to the vise and tweak a bit here and there.  Does it need more weight, a bead here or there, perhaps less weight, a different color added or taken away, a shorter tail, or a multitude of other options.  Then you repeat the process.  It is much like the caveman hunter going through a transition from stick spears to stone arrowheads, and finding that sharp stones make for bigger game.  The entire process is enjoyable and adds a whole other creative dimension to fishing.


It has been a fortunate fall thus far.  The attempts at fish foolery have paid off greatly.  This beautiful specimen took the Magic Dragon sculpin pattern.  I was in shock at how girthy this guy was.  It would take almost four hands to reach around him. 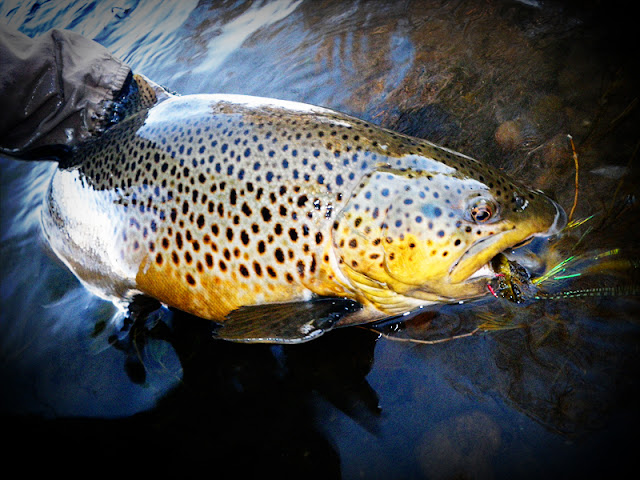 I am becoming more and more convinced that there are large fish in most waters.  The trick is figuring out location and feeding patterns.  Our night fishing escapades really brought this idea home.  A run in an easily accessible area, that is fished with heavy pressure day after day can still put out massive fish.  Shane proved that point once again with THIS FISH from this past weekend.  Big fish have to eat too, we fishermen just have to figure out the wheres and hows. 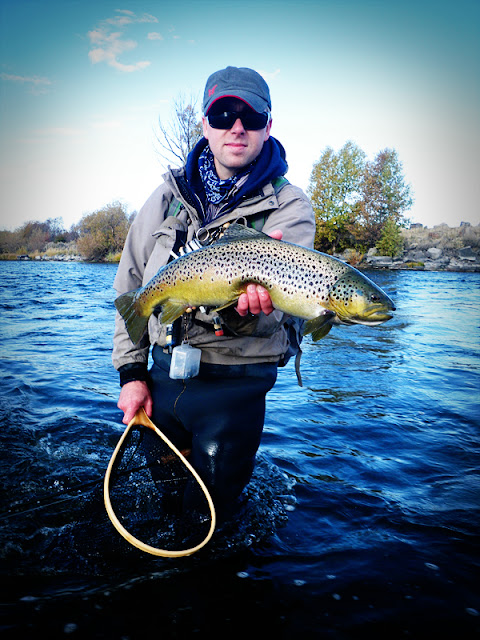 This week we'll be up north chasing macks and some more browns with gaudy streamers.  Let's see how the lakers take to our deceitful ways.
Posted by Chris at 10:27 PM