From The Ocean To My Backyard

If someone told me I had to walk 900 miles, scaling many cliffs, mountains, and hills, just to get some loving I would say they were crazy.  Some fish we respect for their fight, some for the difficulty of catching, some for their looks, some for the unique places they are caught, some for the ease of catching, and others because they are simply an amazing species.  Usually the fish we catch are a combination of such attributes.  Steelhead, or any anadromous fish for that matter, deserve their proper respect.  Beginning as a little smolt these fish travel all the way back to the ocean over waterfalls and multiple dams, passing countless predators, and all because something in their bones tells them to.  If I weren't willing to travel that far on foot for some sweet loving, I sure as heck wouldn't do it for some seafood.

After one to two years of swimming around in the salty blue, something tells these magnificent creatures it is time to return home.  In other words, it's business time.  Slowly they group together and work their way back upstream, across the same dams and waterfalls they passed when young, all the way back to the shallow headwaters they came from.  All this is done so the cycle can repeat itself.

These fish are a gift.  What they do and give is almost a selfless act.  So much of the ecosystems they reside in are blessed by their presence, life, and death.  They bring nutrients and sustenance to the waters by giving new life to their children and dying themselves.  It is quite a gift indeed.

"If our father had had his say, nobody who did not know how to fish would be allowed to disgrace a fish by catching him."  Norman Maclean, A River Runs Through It

It is with a great respect that I choose to fish for steelhead.  Understanding their sacrifice makes the experience all the more worthwhile and special.  To respect a fish is to know the gift it is to you.

I was beginning to think there would not be time to make a spring trip this season.  Various obligations threatened the idea, with school finals taking the forefront. It was either go later than I normally would or not at all.  Shane showed interest and so we made plans for a two-day excursion just after classes were out.

With Shane's little truck packed full of camping and fishing gear we set off around 11pm.  The plan was to arrive there around 2am and pass out in the car till dawn, then set up camp after a full day of fishing.  The amount of wildlife increased as we got closer to our destination. We arrived around 2am as expected.  After parking we couldn't help but throw on headlamps and scope out the water.  To our pleasant surprise we found a handful of fish hugging the bank as they worked their way upstream.  Shane threw on some crazy glow jig streamer I had handy and set to work.  He set into one and promptly broke off.  After putting on a large black streamer, and casting without any success we decided to get some sleep and put our energy into the next days fishing.

I closed my eyes and the next thing I knew Shane was telling me to get up.  I laughed as it was barely light outside.  He kicked the heater on and we wadered up while munching on poppyseed muffins.  It was C.O.L.D.  We beat the water and fought iced guides most of the day.  The four of five fish we saw the night before gave us a false impression about the amount of fish in the river still.

We moved around a lot.  The name of the game was searching and sightcasting.  Throughout the day we picked up one or two fish here and there.  By the end of the first day we managed to bring around a dozen fish to hand. 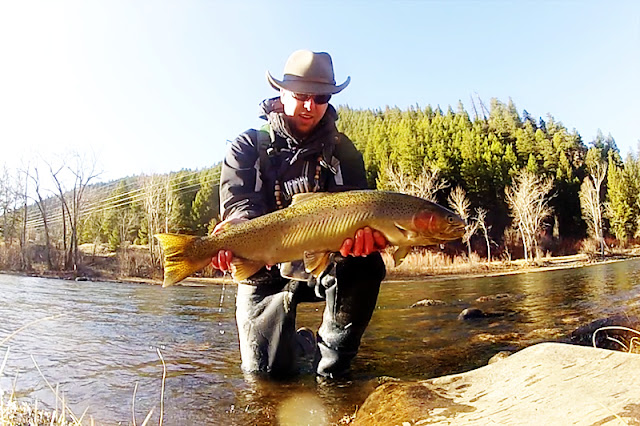 This hen was the first fish of the trip.  We had moved around to a few places that normally produce fish quite well, but with no success this time.  We found ourselves back to the first place we started, on our way back upriver, but on the opposite bank.  Shane had just worked upstream around the bend and was out of hearing. I launched my line out in the middle of the river, already having worked the bank.  Halfway through the drift the little indicator dunked and I set.  The steelie fought hard, and it felt great. The first fish of the trip was caught, landed, and photoed without a witness.  It felt good to get the skunkmonkey off my back.  Shane eventually made his way back and we fished the spot a bit more without any luck.  We then headed upriver to another hopeful spot. 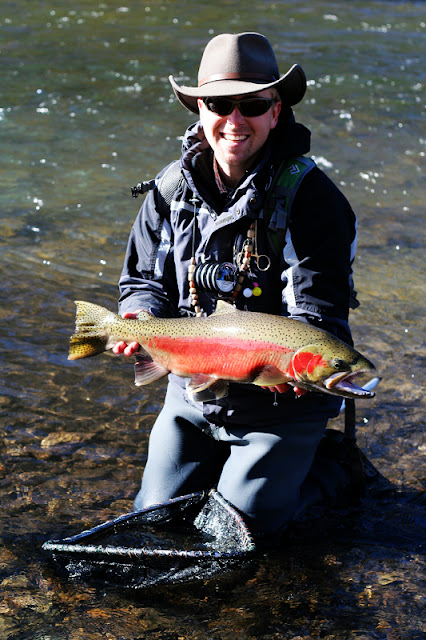 The temperature had warmed to a comfortable level by then and we were no longer fighting ice on the guides, though the temperature was still on the verge of freezing.  On the second cast this beautiful male took.  Shane and I both thought the chances of there being another fish in the run were good so he took a swing at the same section.  Just as he was asking where the previous fish had taken I said "right there" as his indicator floated over the spot and tanked.  We both began laughing immediately as he set into another fish. 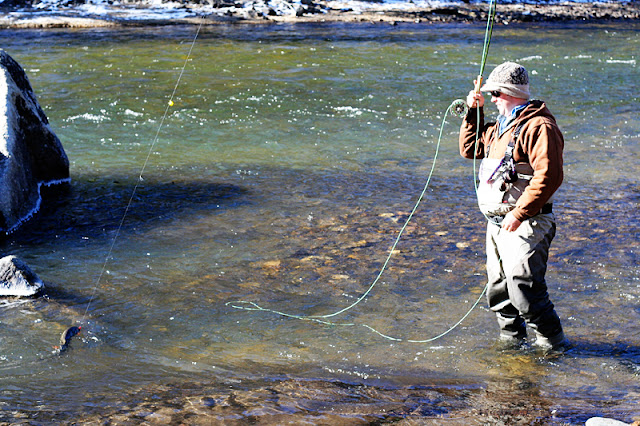 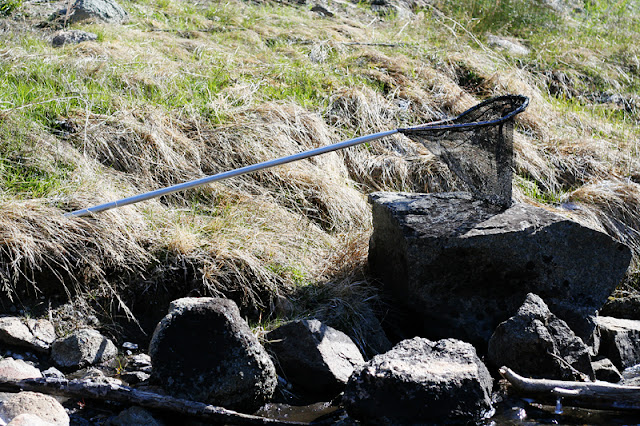 The net showed just how cold it was outside.  Funny how it seemed warm by this point in the day, compared to what it was all morning. 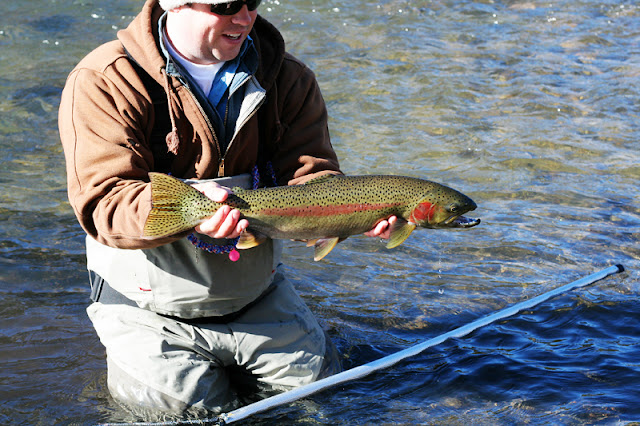 Shane got rid of his skunkmonkey and broke in the Loop XACT all in one time. 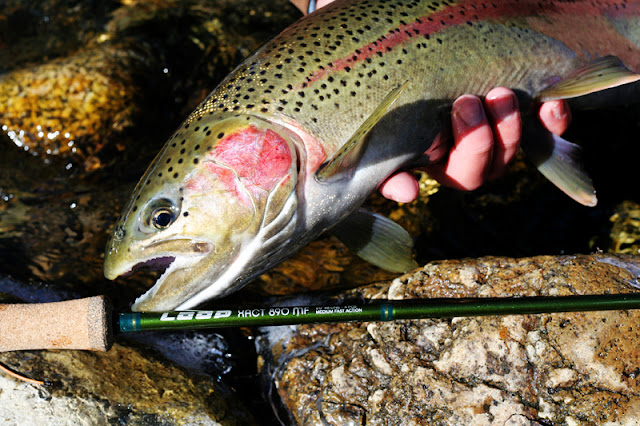 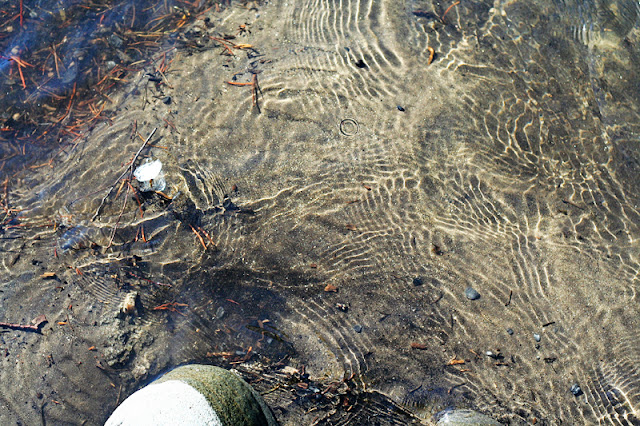 For someone who is unfamiliar with the area and pyrite, they might think they hit the jackpot. This "fools gold" is everywhere in the upper Salmon area.  Little flecks of gold-like substance flicker everywhere in the sandy places along the banks. 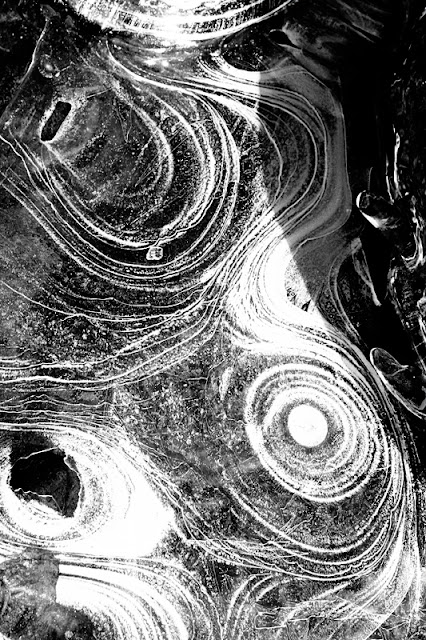 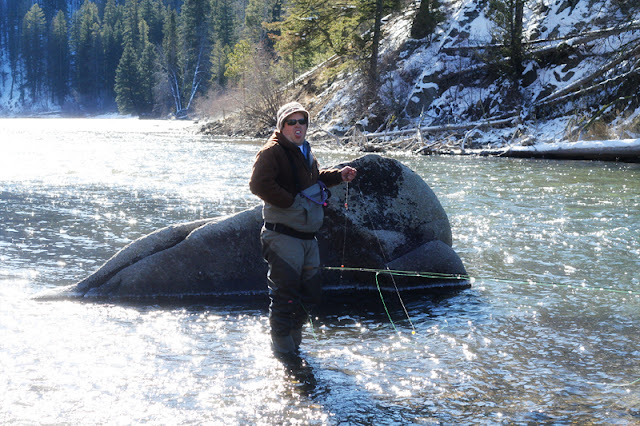 Shane making one of his characteristic faces.  He could give Jim Carrey a run for his money. 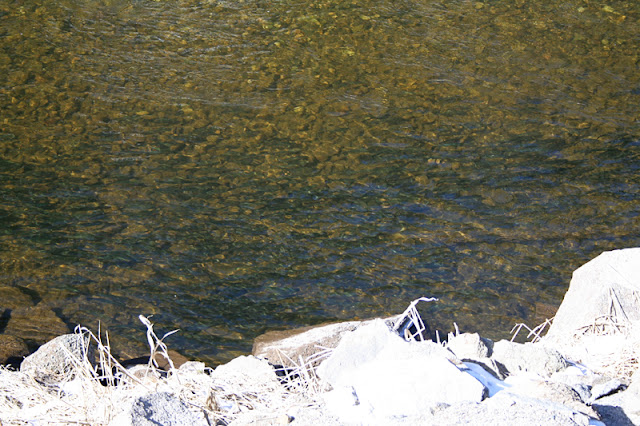 I have never fished for steelhead this late in the season, so it was quite a sight to behold when we first witnessed the smolt everywhere.  They were packed in the hundreds along certain sections of shoreline.  I watched them in awe as I thought of the journey they were just beginning, and that I may have the honor of catching one of those that I watched at a later date. 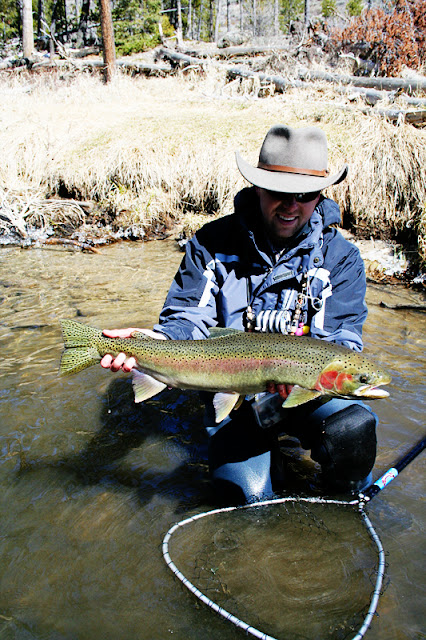 We kept working our way upriver, combing the water for any fishy places.  If there were redds, we would pass them and move on, though to be honest we probably only saw two during the whole trip.  The day continued with a fish here and another there. 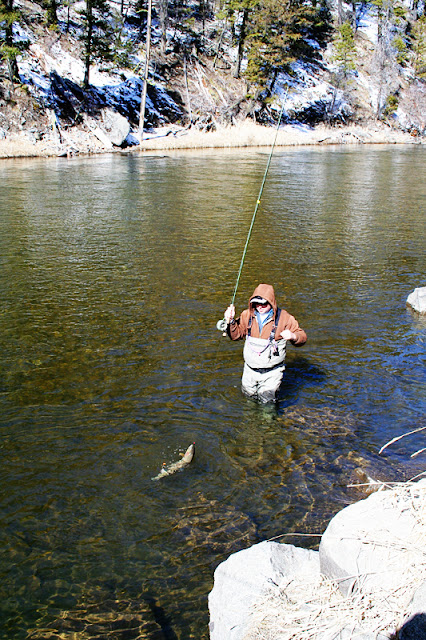 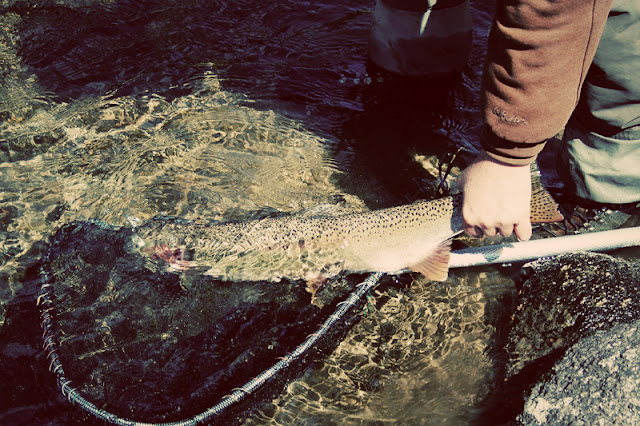 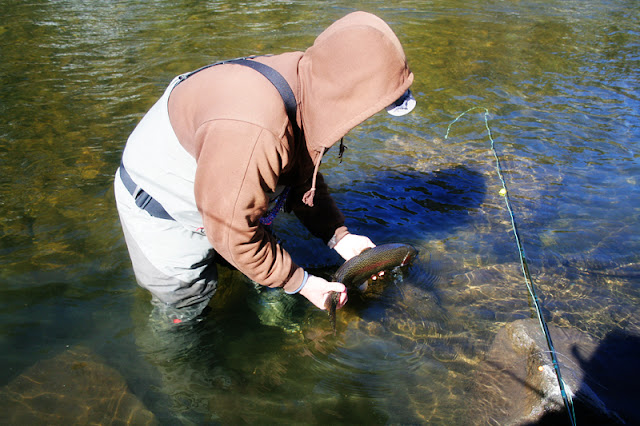 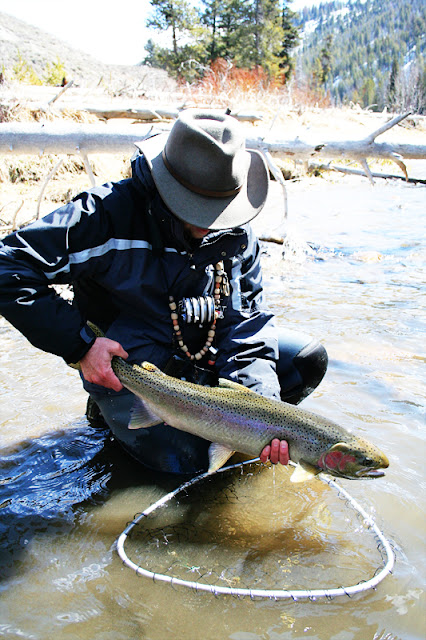 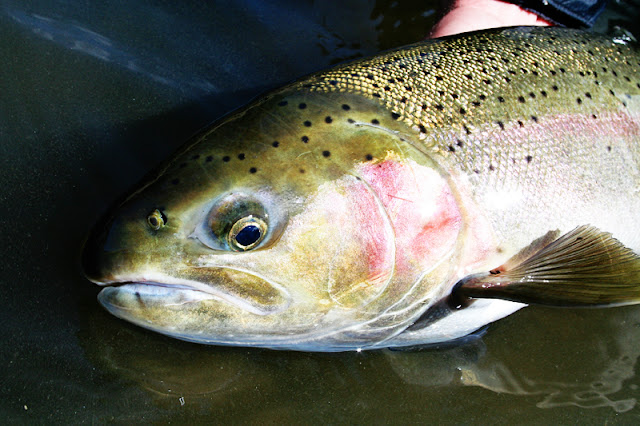 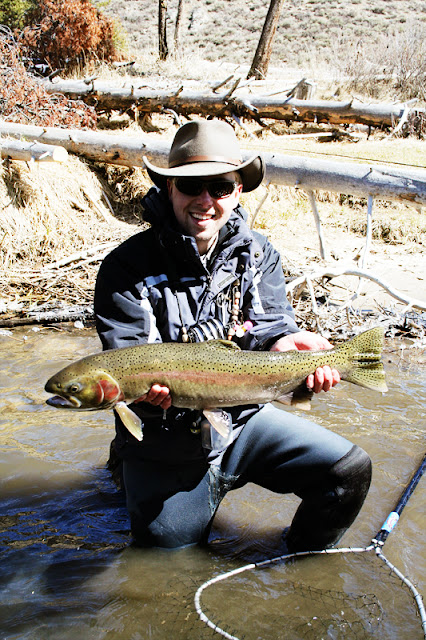 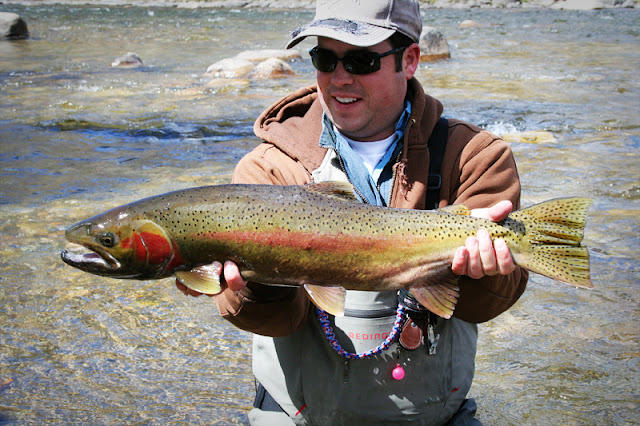 Shane with a great one.  Most of the fish caught were wild.  I think only one was a hatchery fish. 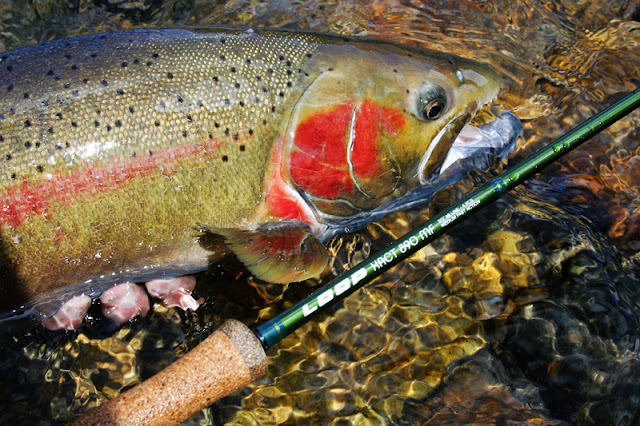 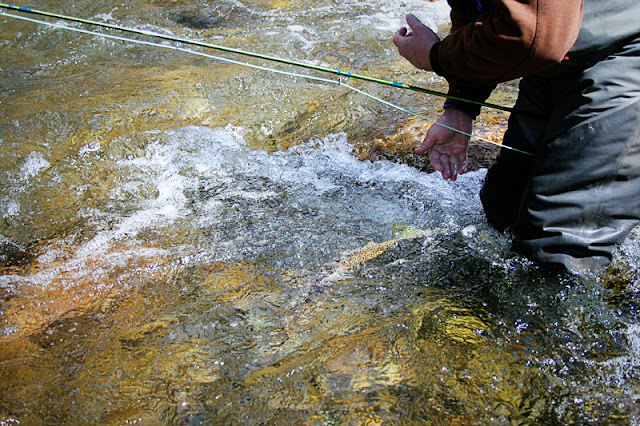 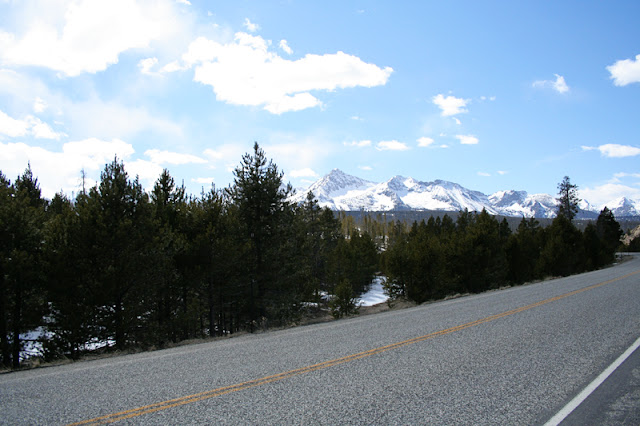 The bluebird skies are deceiving when it comes to the real temperature.  The night we slept in the tent got as low as 9 degrees Fahrenheit   It was colder than we had anticipated, which made for a restless night.  Next time I'm bringing extra blankets for certain! 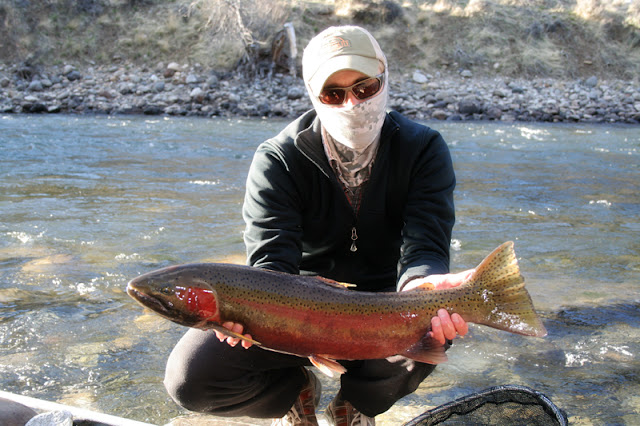 This was the last landed fish for the trip.  The second day we took our time, enjoyed the scenery, and didn't fish too hard.  We both hooked up with fish, but did not land any.  We were both so content with the previous days result that there was no need to push ourselves that hard, the trip had already been worth it. 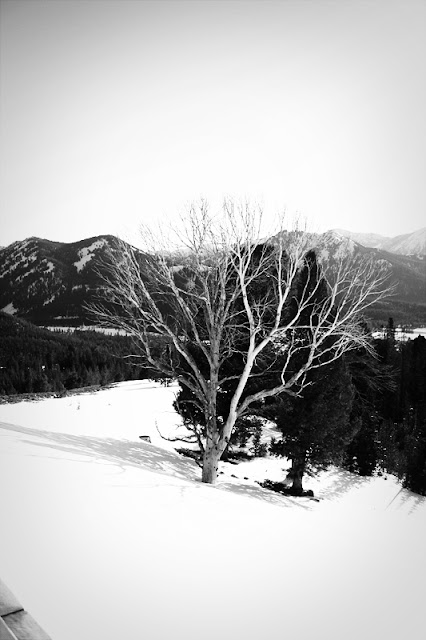 This is a shot of a tree from the Galena Summit overlook.  The headwaters of the Salmon River can be seen from this spot, as well as a breathtaking view of the Sawtooth Mountains. 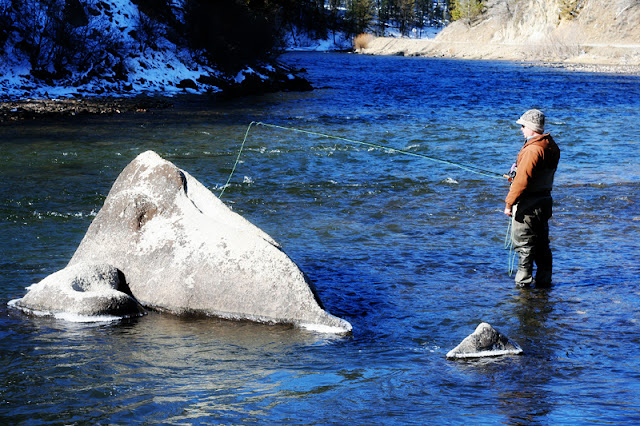 Though the trip was certainly later in the season than I would like to go, it was still remarkably enjoyable.  Shane always makes for great company, and the scenery is always fantastic.  It was a couple days well spent with a species I hold a great respect for.  I'm grateful they make the effort, and take the time, to come visit me in my backyard.
Posted by Chris at 12:57 AM